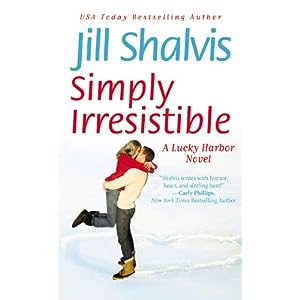 Why I read it:  I discovered Jill Shalvis a few years ago and she has become an autobuy for me – especially her full length novels.
What it’s about:  Maddie Moore is heading to the small seaside town of Lucky Harbor in Washington State, where she has been left a one third share in a the Lucky Harbor Resort by her recently deceased mother.  She has 2 half sisters (all different fathers – her mother was a bit of a free spirit) that she’d like to connect with.  She’s lost her job and she’s recently ended a relationship with a scumbag who had control issues and hit her so she’s sworn off men.  Arriving in Lucky Harbor, the “resort” is a virtual ruin, there’s no money and the sisters don’t get along all that well.  Plus, she nearly runs a very hot biker off the road – so she’s off to a good start.  Can she find a home, family and love in Lucky Harbor?
What worked for me:  I really liked this book.  Maddie was trying hard to regain her confidence and stand her ground and she was very likeable in the process.  But what made the book was Jackson Cullen III (Jax) – *le sigh*.  He was one amazing hero – gorgeous, sexy and sweet.  (In fact, there are at least 3 hot guys in Lucky Harbor – luckily there are 3 sisters so there’s no prizes for guessing what’s going to happen – book 2 in the series comes out in April next year – but don’t worry, there’s not much sequel bait.)  Jax and Maddie have instant chemistry but of course, as Maddie has sworn off men, she’s reluctant to start something.  Also, she’s busy trying to refinance the resort to fix it up – her sisters want to sell it but she wants to stay and make the resort a success – so she doesn’t know how long she’s going to be around.  Plus, Maddie is understandably skittish about a big male getting close to her – Jax picks up on it very quickly and it was very sigh-worthy how protective he felt of her and how he was certain it wasn’t Maddie’s fault (of course) and how he wanted a few minutes alone in an alley with the scumbag ex to teach him a lesson.  Jax is very gentle (even though he’s big and muscular) and would never hit a woman.  Even when Maddie believes that, it takes a while for her body to stop the conditioned flinch from a sudden movement near her face and I liked that Jax was patient with this.  Jax has some secrets too – related to his profession as a lawyer. He left the rat race a few years before the story begins because he didn’t like who he was there and come home to Lucky Harbor to kick back, help in his friend’s bar and  do some very fine carpentry work and renovations  but he also does occasional legal work for locals who need things.  And he’s bound by privilege so there’s things he knows but he’s legally bound not to reveal to Maddie much as he wants to (cue mysterious music).  The plot isn’t particularly ground breaking or new but the characters are so darn likeable and I really didn’t mind.  The sisters and Jax (especially Jax!) were so well drawn that it was a pleasure to spend time with them.
I liked the humour (which is typical of Ms. Shalvis’ writing style and one of her many attractions for me) –

The sun was so bright it hurt her eyes and head, and also her teeth, which made no sense.

“Hangovers are a bitch” Jax said and dropped his sunglasses onto her nose. [isn’t he sweet??]

Maddie was behind him, working really hard at not looking at his butt.
And failing spectacularly.
So when he unexpectedly twisted around, holding out his hand for the clipboard she was now holding, he caught her staring at him.
“I, um – You have a streak of dirt,” she said.
“A streak of dirt.”

“Yes.” She pointed to his left perfectly muscled butt cheek.  “There.”He was quiet for a single, stunned beat.  She couldn’t blame him, given that there were both covered in dirt from the filthy attic.  “Thanks,” he finally said. “It’s important to know where the dirt streaks are.”“It is,” she agreed, nodding like a bobble head.  “Probably you should stain-stick it right away. I have some in my purse.”“Are you offering to rub it on my ass?”  She felt the heat flood her face and he grinned. “You’re a paradox, Maddie Moore.  I like that about you.”
“Is that because I said nothing was happening between us, and then I…”
“…Wanted to touch my ass”. He finished for her.  “You can, by the way.  Anytime.”

And really, that right there, is why I liked this book so much.
What didn’t work for me: There wasn’t anything that particularly bothered me about the book.  Sure, there wasn’t anything earth-shatteringly new in the plot and the mystery wasn’t much of a mystery (still, I won’t give it away here *grins*) but really, the characters were what made the story work.  In a less skilled author’s hands, it would have been meh, but Jill Shalvis writes good character and she’s especially good with the male POV so it worked.
What else:  Jax was an excellent hero and this was a really good, funny, sexy, contemporary romance.  And possibly my favourite Jill Shalvis so far. I’ll definitely be picking up book 2 but, I’m probably looking forward to Chloe’s book (3) more.