Why I read it:  I finally got around to listening to Easy on audio.  When I was browsiing my TBR for what next to read, I felt it was the right time to read this one.  I bought it when it first came out but the timing was never quite right before.

What it’s about: (from Goodreads)  He was lost and alone. Then he found her.

And the future seemed more fragile than ever

As a child, Landon Lucas Maxfield believed his life was perfect and looked forward to a future filled with promise — until tragedy tore his family apart and made him doubt everything he ever believed.

All he wanted was to leave the past behind. When he met Jacqueline Wallace, his desire to be everything she needed came so easy…

As easy as it could be for a man who learned that the soul is breakable and that everything you hoped for could be ripped away in a heartbeat.

What worked for me (and what didn’t):  I think part of the reason it took me a while to actually read the book was that I was a bit scared I wouldn’t like it.  I adored Easy.  Would Breakable be a re-hash? Would it be boring?  Would it somehow retroactively impact my enjoyment of the first book? As it happened, I was very much feeling the NA love after successful reads from Kristen Callahan and Sarina Bowen. Being up to date on my audiobook reviewing commitments (which is kind of unprecedented but yay me!) I decided to revisit Easy via the audiobook which was waiting patiently on my TBL.  And, about halfway through the listen, when I was searching my TBR for my next read and I was all caught up in the Lucas love, I thought – well it’s time.  And there was a beautiful symmetry to listening to Jaqueline’s perspective and reading Lucas’s.  I think it wouldn’t have worked as well if I hadn’t already read Easy and it probably helped that I was halfway through the listen before I cracked open the book – because I never caught up to Lucas’ POV but I also had Jacqueline’s perspective fresh in my mind when I read reading.  In the end, for whatever reason, none of my fears were realised and I enjoyed the heck out of Breakable. I’d say it’s not quite as good as Easy because it essentially tells the same story but in more detail and from another perspective.  So it’s not entirely “fresh and new” (although there are aspects of the story which are).  But it wasn’t boring and it didn’t feel like just a “re-hash” either. If anything, it made me love Easy more.

END_OF_DOCUMENT_TOKEN_TO_BE_REPLACED

Here Without You by Tammara Webber Why I read it:  I bought this one on release day – I even broke my rules about not spending over $8 for an ebook for this one.  And then I was kind of scared to read it – even though I’d been told it was great and has a HEA, I still put off reading it.  But then when I was looking for a book to read this week, this one called to me.

What it’s about: (from Goodreads)  Reid Alexander, Hollywood’s hottest young actor, is completely distracted. And this time it isn’t his latest co-star or a major new film role that’s demanding his attention but something far more life-changing…

The hotly anticipated fourth book in the irresistible Between the Lines series.

What worked for me (and what didn’t):  I feel a little conflicted about this book.  I lapped it up and slurped it down very quickly.  I enjoyed the writing and I loved the characters.  I cried and laughed and was moved in various ways by Brooke, Reid, River and Dori.  But.  But I wish it had been longer.  I wish there had been more of all of it.

END_OF_DOCUMENT_TOKEN_TO_BE_REPLACED

Good For You by Tammara Webber 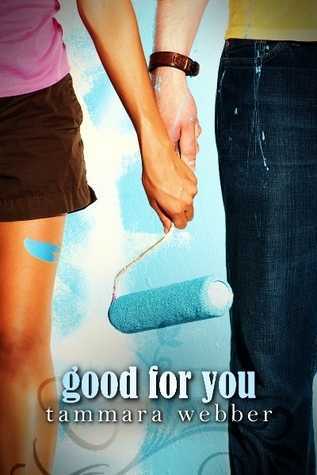 Why I read it: I read an early copy of Dare You To (Pushing the Limits #2) recently (soooo good) and I wasn’t ready to leave New Adult for something else – I also wanted to read something I’d been saving for a rainy day, so I opened Good for You, a book I’d bought last year at the same time as Easy.
What it’s about:  (from Goodreads)  Reid Alexander’s life is an open book. His Hollywood celebrity means that everything he does plays out in the public eye. Every relationship, every error in judgment is analyzed by strangers. His latest mistake totaled his car, destroyed a house and landed him in the hospital. Now his PR team is working overtime to salvage his image. One thing is clear—this is one predicament he won’t escape without paying for it.Dori Cantrell is a genuine humanitarian—the outward opposite of everything Reid is about. When his DUI plea bargain lands him under her community service supervision, she proves unimpressed with his status and indifferent to his proximity, and he soon wants nothing more than to knock her off of her pedestal and prove she’s human.Counting the days until his month of service is over, Dori struggles to ignore his wicked magnetic pull while shocking him with her ability to see past his celebrity and challenging him to see his own wasted potential. But Dori has secrets of her own, safely locked away until one night turns her entire world upside down. Suddenly their only hope for connection and redemption hinges on one choice: whether or not to have faith in each other.
What worked for me (and what didn’t): Man, I loved this book. It was beautiful, heartwrenching, unexpected and bittersweet.  Never fear – there is a happy ending, but not everything in this book is hearts and roses and not everything is miraculously resolved.
The writing is beautiful, the characterisations clever and nuanced, the style spare and direct, while at the same time, leading the reader up to the door of various concepts/conclusions but leaving them for the reader to ponder rather than swinging a heavy hammer.
END_OF_DOCUMENT_TOKEN_TO_BE_REPLACED

Why I read it: This was another “new adult” book recommended by Jane at Dear Author.  I actually bought 2 by this author but I haven’t read the other one yet.  I’m saving it.
What it’s about: (from Goodreads)   When Jacqueline follows her longtime boyfriend to the college of his choice, the last thing she expects is a breakup. After two weeks in shock, she wakes up to her new reality: she’s single, attending a state university instead of a music conservatory, ignored by her former circle of friends, stalked by her ex’s frat brother, and failing a class for the first time in her life.
Her econ professor gives her an email address for Landon, the class tutor, who shows her that she’s still the same intelligent girl she’s always been. As Jacqueline becomes interested in more from her tutor than a better grade, his teasing responses make the feeling seem mutual. There’s just one problem—their only interactions are through email.
Meanwhile, a guy in her econ class proves his worth the first night she meets him. Nothing like her popular ex or her brainy tutor, Lucas sits on the back row, sketching in a notebook and staring at her. At a downtown club, he disappears after several dances that leave her on fire. When he asks if he can sketch her, alone in her room, she agrees—hoping for more.

Then Jacqueline discovers a withheld connection between her supportive tutor and her seductive classmate, her ex comes back into the picture, and her stalker escalates his attention by spreading rumors that they’ve hooked up. Suddenly appearances are everything, and knowing who to trust is anything but easy.

What worked for me (and what didn’t): I loved this book.  The main characters are 18/19 and 21/22 I guess and it is set at a college so it qualifies as “new adult”/YA.  But in all other respects it is a contemporary adult romance.   Eminently satisfying, with beautiful writing and a hot sexy hero – what more could you want?
The book starts when Jacqueline is attacked outside a frat party and Lucas intervenes to stop her from being raped.    It’s the first time she’s aware of him but afterwards, she sees him everywhere.  In the meantime, having been absent from her economics class for 2 weeks following the breakup with her douche-y ex-boyfriend, she’s terribly behind and after a groveling session with the professor, is assigned an extra project and help from the class tutor.  So, there’s Lucas the hottie rescuer in the back of the class and Landon, the smart tutor who flirts with her on line.  Lucas rescues her physically and Landon rescues her educationally.  Both seem so different but both have significant attraction. What to do?
I won’t spoil the story with too much more description but be assured that the romance is very satisfying and the story has a HEA.    There is more to this book than meets the eye; with depth and emotion,  close friendships,  steamy love scenes and wonderful main characters.  And don’t worry, there’s no major love triangle going on – things become clear fairly early in the story.
What else?  Here’s a taste of the great writing and sexy hero number 1….

Eyes blazing, he looked down at me. “Jacqueline?”
I blinked. “Yes?”
“The night we met—I’m not like that guy.” His jaw was rigid.
“I know tha—” He placed a finger over my lips, his expression softening.
“So I don’t want you to feel pressured. Or overpowered. But I do, absolutely, want to kiss you right now. Badly.”
He trailed his finger over my jaw and down my throat, and then into his lap. I stared at him. Finally comprehending that he was waiting for a response, I said, “Okay.”
He dropped the pad onto the floor and the pencil followed, his stare never unlocking from mine. As he leaned over me, I felt a heightened awareness of every part of my body that touched a part of his—the edge of his hip pressed to mine, his chest sliding against mine, his fingers tracing from wrists to forearms and then framing my face. He held me in place, lips near my ear. When he kissed the sensitive spot, my breath shuddered. “You’re so beautiful,” he whispered, moving his mouth to mine.