Like the Taste of Summer by Kaje Harper  – B+  This free online short is a little gem.  Jack thinks back to the summer he met Sean, some 28 years earlier and recounts how they got together. I actually enjoyed it all the more knowing that they’d made it and were still in love. 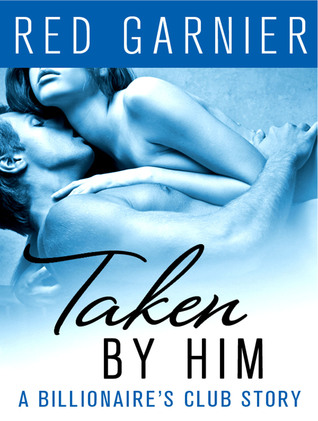 Taken by Him (Billionaire’s Club #2) by Red Garnier – C  This erotic romance is very short (just over 80 pages) and at page 1 the couple have never before met, so it was always going to be a big ask for me to buy into the HEA.  I had the impression that the book doesn’t take itself to seriously and the tone of the hero’s OTT arrogance was, I thought, intended to be funny rather than insulting (as it may have been in a serious book or if a reader is in a serious mood perhaps).  The sex was very hot and Luke certainly had a massive turnaround from being a total manwhore to being a “you’re-the-only-one-for-me-for-the-rest-of-my-life” guy.  I liked it, but there was something lacking in it for me. And I can even tell you where it was.  It was in Chapter 1, here:

Two hours later they were both a little too…merry.

Luke had seemed hesitant to drink first, but then he’d downed a whole beer within minutes and soon ordered more. They’d flowed into conversation like they’d met years ago, teasing back and forth.

Almost their entire getting to know each other is contained in that two hour period which occurs off page.  For me to really root for them, I needed to see their connection rather than just be told it existed.