I’m over at ARRA with…

Author: Kaetrin
a review of Michelle Diener’s The Emporer’s Conspiracy.  There’s a giveaway for ARRA members. I gave it a C- but that was largely because I was expecting a romance and it’s more a historical novel with some romantic elements. 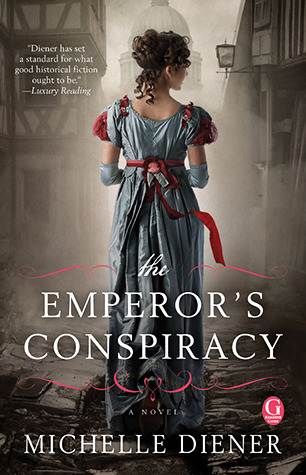 Author: Kaetrin
My monthly post was getting to ungainly, so I’m going to try a few different things to tizzy it up.  Suggestions welcome. 🙂
On Paper/eBook

The Emperor’s Conspiracy by Michelle Diener – C-  Isn’t that a beautiful cover?  I reviewed this one for ARRA.  The short version is that I thought this was a romance but it was an historical with romantic elements.  There is a relationship but the usual romantic ending isn’t present.  It isn’t NOT there. It’s just… absent.   The conspiracy in the book is actually true but I’m not sure how realistic Charlotte’s backstory was.

Archangel’s Storm by Nalini Singh – B+  I reviewed this one for ARRA and will post a link when the review goes live.  But, the short version is that I really enjoyed the quieter love story in this book and I thought it suited the covert nature of Jason, the Spymaster.  I liked the way Mahiya chose to live a life full of joy and love rather than become bitter and hard.  I liked the clever way Singh made this an aspect of Mahiya’s great strength of will rather than it coming off as being passive and wishy-washy.
The cover does look a bit like a bird crapped on it though.

Craving  (Curio #3) by Cara McKenna – B+  This is the 2nd Curio vignette and follows on from Coercion.  It won’t mean much to readers who haven’t read Curio (which is wonderful so go read it).  I enjoyed this one more than Coercion.  I’m not sure if it was the subject matter which I enjoyed more or that it was in Caroly’s POV.  Which, if it is, is unusual for me, because I’m all about the hero.  The lovely tension in the two vignettes so far is that we know that Caroly and Didier love each other but they do not.  It is delicious and a little bittersweet at the same time.  Surprisingly, I haven’t become impatient with it – each character has their reason for not making the big reveal yet and they make sense, but also, the stories are short (this one is less than 45 pages) so I don’t feel I’m being manipulated by the author, but rather that their relationship is unfolding at it’s appropriate pace.  There is some beautiful writing in this little story and I found it very touching.  Plus, sexy.

His lips and tongue trace my throat, his moans hot and low. In French he tells me, “I want you. So much.”

“I want you.” I’ve never not wanted him. Even in the moments when he frustrates me, I would never wish I were elsewhere. He’s a hundred things to a hundred women, a different pretty bauble reflecting their unique tastes. But he’s my kaleidoscope. I want to keep turning him, discovering new patterns, seeing him through new eyes.

Captured by You by Beth Kery – C+ Very sexy novella which is part of the “One Night of Passion” series.  The hero was Australian and some of the slang was misused which jarred for me (for example, “Blimey” is more English than Australian and “starkers” means naked, not crazy).  The idea of Chance taking photos of the heroine naked was a little on the squicky side for me initially but I did suspend my disbelief and buy into the set up.  There is a rather fortunate and miraculous event which solves their major conflict which was a little disappointing in terms of “realism”  but that’s probably being overly picky because what part of the book is “realistic” anyway? Sexy photographers come across nubile naked women in the forest and offer to tie them up all the time right?    It’s fun and enjoyable but not earthshattering.  I am however, looking forward to Exposed to You in a major way.

I have also read Men of Smithfield: Adam and Holden by LB Gregg, Pressure Head by JL Merrow, as well as the first 2 novellas in the Midnight Scandals anthology (the only reason I didn’t read the Sherry Thomas story was that it’s set after her recent novels and I haven’t read them yet, so I’m saving it for later I do like to read in order)  – and I’m reading Reflected in You by Sylvia Day right now, . My reviews for all of these will be up next month.

I haven’t done much audio listening this month – I’ve been catching up on Savage Lovecasts (I’m into 2012 now!) because podcasts are easier to commit to when you’re mind is a bit scatty as has been the case the last couple of weeks.

Salvation in Death by JD Robb, narrated by Susan Ericksen – B-  I realised that I had messed up the series order and listened to Promises in Death too soon, missing out this one. Naturally, my OCD kicked in and I had to rectify that error.  Salvation doesn’t pack the emotional punch of Promises and the victim is no peach, but I enjoy the series so while it wasn’t my favourite, it was still time well spent.

Getting Rid of Bradley by Jennifer Crusie, narrated by Elenna Stauffer – A My review of this one is over at AudioGals.

Strange Bedpersons by Jennifer Crusie, narrated by Madison Vaughn – B+  When I read this book some years ago, I gave it about a C.  I enjoyed it much more on audio.  Part of that, I think, is because I’m older and I have a greater appreciation for the older heroine – she’s 36 (and he’s 38) than I did when I first read it.  While 36 isn’t old, she’s older than the average heroine, even now I think.  Perhaps it was merely an alignment of the planets thing, but I think the excellent narration by Ms. Vaughn was what mostly added to my enjoyment.  She really nailed this one.  It was a lot of fun.

I’m listening to Extreme Exposure by Pamela Clare, narrated by Kaleo Griffith at the moment and my review will be up next month.  So far, it is made of WIN.

In case you missed them, I also reviewed the following books this month: