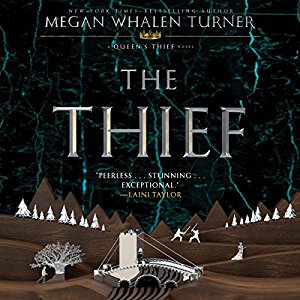 The Thief by Megan Whalen Turner – B I’ve had the ebook of The Thief on my TBR for ages as the entire series comes highly recommended. I was warned that this first book in the series had a slightly different tone to the later books and that it wasn’t as strong a story. But I like to start at the beginning. The entire series has recently been re-released on audio with a highly rated narrator, Steve West.

It is the story of Gen, a young thief who begins the book in the prison of Soonis. The Magus of Soonis offers Gen a chance to get out of jail. There is a stone, called “Hermiathes’ Gift”, said to bestow immortality on whoever it is given to. The Magus needs a thief to steal the stone and then to give it to the Magus so the Magus can “give” the stone to the King of Soonis, thus strengthening his suit with the Queen of Eddis. Gen, the Magus and his two apprentices set off on a covert mission across Soonis, through Eddis and into Attolia to seek the stone.