I’m over at Dear Author with a review of Riding Dirty by Jill Sorenson. A somewhat different take on MC (Motorcycle Club) books and super hot. I liked it. 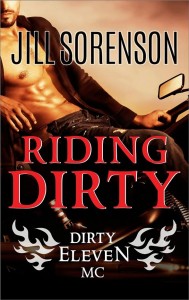 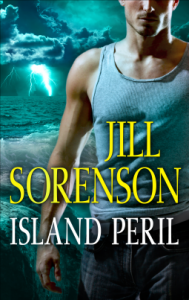 Why I read it:  I was provided with a review copy by the publisher via NetGalley.

What it’s about: (from Goodreads)  It started as a girls’ outing to California’s beautiful Channel Islands State Park. When Ella Hammond embarks on a kayaking trip with sexy adventure guide Paul Dawson, sparks fly—but so does gunfire from a boat of drug smugglers.

Now Ella and Paul are on the run, soaked and stranded in a rocky hideout. Ella feels like she’ll never be warm again. Until Paul shares his body heat—igniting a fire between them that’s nearly too hot to handle!

What worked for me (and what didn’t):  Ella is on a camping/hiking long weekend with her sister Abby and Abby’s teenage daughter, Brooke.  When Brooke’s father cancelled at the last minute, Ella and Abby stepped in to save the trip.  They are planning a day kayaking trip over to nearby San Miguel Island off the Californian coast.  Their guide is the sexy Paul Dawson (brother of the heroine, Paige, from Scenes of Peril). Because: reasons, Paul and Ella end up kayaking alone.  They are both single and have both been significantly affected by the San Diego earth quake (featured in Aftershock) and it is clear that there is chemistry and attraction between them.  There is a “no fraternising” rule though so Paul is cautious about pursuing things.

Scenes of Peril by Jill Sorenson 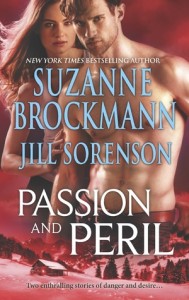 Why I read it:  I received a review copy from the author. This brand new novella is being packaged with a re-release Silhouette title from Suzanne Brockmann called Scenes of Passion.  The anthology is called Passion and Peril and releases on November 26.

I don’t remember much of Scenes of Passion – I read the original category a few years ago which I picked up at my local UBS.  I gave it 3 stars on Goodreads so I gather from that I thought it was okay but nothing amazing.

What it’s about: (from Goodreads)  The snowstorm forecast says it’s a big one, but wildlife photographer Paige Dawson is prepared. Until a terrible car accident brings a sexy stranger to her remote mountain cabin and the bad weather strands them together . . . for days. The heat between them is like nothing she’s ever known — incendiary, undeniable. And just as she begins to hope for something real with Colin Reid, after the snow melts, he remembers what caused his accident . . . and it may be too late for them both.

What worked for me (and what didn’t):  While I thought the beginning of the story was a little overdone (too many exclamation marks), things really picked up in chapter two.  Paige and Colin had a lot of things in common and their connection and attraction was obvious.  I thought Colin in particular was pretty funny in the way he thought about things.  Some of his musings regarding a naked Paige made me chuckle.  The novella is only about 70 pages long, so there wasn’t a lot of time in which to draw the characters and make me care about them, but by the end of chapter two, I did.  There’s not time for deep character exposition but the essential parts of them were on the page and it was clear that their connection was based on more than mutual lust.