After We Fall by Melanie Harlow 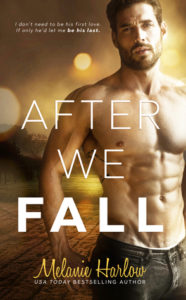 Why I read it:  I picked this one up recently for the bargain price of 99c. Go me.

What it’s about: (from Goodreads)  Jack Valentini isn’t my type.

Sexy, brooding cowboys are fine in the movies, but in real life, I prefer a suit and tie. Proper manners. A close shave.

Jack might be gorgeous, but he’s also scruffy, rugged, and rude. He wants nothing to do with a “rich city girl” like me, and he isn’t afraid to say so.

But I’ve got a PR job to do for his family’s farm, so he’s stuck with me and I’m stuck with him. His glares. His moods. His tight jeans. His muscles.

Pretty soon there’s a whole different kind of tension between us, the kind that has me misbehaving in barns, trees, and pickup trucks. I’ve never done anything so out of character—but it feels too good to stop.

And the more I learn about the grieving ex-Army sergeant, the better I understand him. Losing his wife left him broken and bitter and blaming himself. He doesn’t think he deserves a second chance at happiness.

I don’t need to be his first love. If only he’d let me be his last.

What worked for me (and what didn’t):  Margot Thurber Lewiston is a rich white city girl from old money. She is the very definition of privilege. She knows it. She’s also awesome, compassionate, funny and smart, good at her job and quick to laugh at herself. I pretty much loved her from the first chapter when she was throwing scones at her shitty ex-boyfriend at a fancy social function. Her uptight WASPy mother basically banishes her from “polite society” until the “scandal” dies down. So she heads to the country to help a farm with a marketing issue and there, she meets grumpy farmer, Jack Valentini.

Jack is a still-grieving widower and veteran with PTSD. Even before all that happened he was never particularly social. So when Margot comes to the farm he is not happy. He just wants to be left alone. The ideas Margot brings with her will draw people to the farm for events and agri-tourism and he’s not interested in any of it. He’s also very unhappy to notice how attractive she is because he is still buried neck-deep in guilt over his war experiences and the death of his wife. (Even though Jack had nothing to do with the death of his wife, he feels that his actions in Afghanistan led to Steph dying in a kind of cosmic karma. So, in his mind, it’s all his fault and he deserves to be miserable for the rest of his life.)

However, Jack does love his brothers and sister-in-law and he adores his baby nephew, Cooper. He knows that standing in the way of what Margot can bring to the business will hurt them, so he, reluctantly, agrees to Margot’s plans. He just wants nothing to do with them personally.

But Margot is there and she’s beautiful and funny and smart – even if she knows very little about farming. And in spite of himself, Jack makes a move.

I liked the way Margot’s quirks are shown and her ignorance. She’s not stupid at all and the humour at her expense is very gentle and balanced with plenty of representation about her other skills and her ability to learn.

Margot was still hopeless at gathering eggs (“ I can’t take that one under the hen… it seems personal, like she really wants to keep it.”), but she remembered lessons from the other day and definitely worked faster.

The main barrier between their HEA is Jack himself and his guilt over the death of his wife and his war experience. Margot is exceptionally patient and caring and very generous. I loved the open and compassionate way she spoke to Jack about Steph and his prior life. I loved that Margot didn’t feel threatened by Steph’s “ghost”. For all that Margot has led a life of great privilege she is not at all a snob and she does not have entitlement syndrome. She works hard in her job even though she technically doesn’t need to do anything and she’s good at it. Over the course of the book she becomes more aware of things she’s missed because of her privilege and makes positive changes in her life to remedy that.

Refreshingly, Margot’s wealth and their usual geographical difference isn’t a huge barrier to Margot and Jack. Given Jack’s ties to the family farm, it wasn’t a surprise where the compromise had to come from so they could be together but I don’t think Margot lost anything in the deal. Her skills are very portable and she’s not too far away from her friends and family.

The chemistry between Margot and Jack is scorching. It kind of has to be for Jack to take any notice of her. Without that, my sense was that Jack wouldn’t have been remotely interested in getting to know Margot. (Once he does however, he appreciates everything about her.) It was perhaps a little too stereotypical that Margot hadn’t had head-banging sex before but I was able to buy into that their physical connection was unique for both of them. It made sense that there was something “extra” drawing them together.

And I couldn’t even tell her about some of the most shocking things— the bruises on my body, the bite marks on his skin, the scratches on his back. The way I’d begged him to be rough. The way he’d used his size and strength to subdue me. The need in me to explore a different side of myself. The need in him to lose control without fear. That took trust— and somehow we had established it in the short amount of time we’d known each other.

Maybe that was the biggest surprise of all.

In books where previous partners are not demonised (such as this one), I’m always interested in how the author handles the inevitable comparison between the dead partner and the new one. I really liked it here.

Sex with Steph was passionate because we loved each other, understood each other, took care of each other. It was a physical expression of our emotional connection and our history. We’d been through so much, and I’d wanted to shelter her, protect her, cherish her, even during sex. I’d never even thought about being rough with her, pulling her hair, leaving bruises on her body. Maintaining control had never been an issue, because I always felt I had it.

Sex with Margot was passionate too, but in a completely different way— if being with Steph was like diving into a beautiful blue sea, being with Margot was like going over Niagara Falls without a barrel. It was rough and turbulent, fraught with panic and desperation. At any given moment, there might be pleasure or pain, fear or relief, stillness or chaos. I had to fight for control, assert myself over her, combat the feeling that I was powerless.

Occasionally Jack goes to the cemetery to “talk” to Steph. This isn’t a paranormal book so Steph doesn’t actually answer him. But he “hears” her voice in his head. He knows what she would say to him were she around to say it, even if he doesn’t always pay those words heed.

No backtalk, you. If you loved me—

“You know I did. More than anyone. You were the love of my life, Steph.”

I was the love of the life you had then, Jack. I was your first love… but I’m not your last.

The above “exchange”, late in the book, was perfect. I loved the way the author explained how a man can love a woman wholeheartedly twice with not conflict. Experience changes you. The death of his beloved wife changed Jack. And Margot loved the man she met and the changed Jack loved Margot.

There was something a little unusual about the ending. I won’t spoil it here but I will say it fit with the battle Jack was waging within himself; whether to move on, try and forgive himself and embrace happiness or whether to stay alone and miserable for the rest of his life.

What else? I also loved that Jack wasn’t magically fixed by the power of true love. He went to a therapist and he took medication. He did work. Margot wasn’t medication or therapy, she was his lover and I liked the sensibility of that narrative.

After We Fall is sad and angsty – I got a bit teary a couple of times and very different in tone to the earlier book in this loosely connected series (Man Candy) but it was very enjoyable. I did have to take the book in two bites. About halfway through I found it fairly easy to put down and I was behind on review books so I interrupted the read. However when I picked the book up again I was pretty much all in.

Jack dropped down and buried his face between my thighs, his tongue swirling over my clit. My legs trembled, and he slung one then the other over his broad shoulders. Then he stood up, my back sliding up the door, my hands flattening on the ceiling. Holy fuck, he was strong! Holding me there on his shoulders, his hands gripping my waist, he sucked my clit, flicking it with his tongue until I was writhing and gasping and…