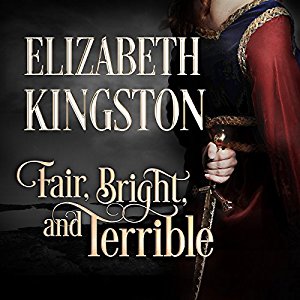 Why I read it:  I’ve been waiting and hoping for this one to come out on audio. So when it did, I bought it stat.

What it’s about: (from Goodreads)  Wales is conquered, and Eluned has lost everything: her country, her husband, her hope. All that remains is vengeance, and she will stop at nothing to have it. Certain there is no trace within her of the idealistic girl who loved Robert de Lascaux a lifetime ago, she agrees to marry him to advance the fortunes of her son, to avoid the nunnery, and most importantly – as an easy way to gain access to the man upon whom she will avenge Wales.

When Robert is asked to marry the woman he has loved for eighteen years, he never hesitates. But the lady who greets him at the altar has so little in common with the girl he adored that he begins to doubt that there is anything left of her bold and passionate younger self. Marriage to her might gain him the fortune and status his family has always wanted, but no wealth has ever mattered to him as much as Eluned has. And she, it seems, does not want him at all.

Trapped in a web of intrigue, revenge, and desire, they cannot forget their past – but can they share a future? The fascinating world of medieval Wales is continued in this riveting companion novel to The King’s Man.

What worked for me (and what didn’t):  When I listened to the first book in this series, The King’s Man, I called it a “creditable debut, boosted by excellent narration”. I certainly enjoyed it but felt a little distanced from the characters. I wasn’t sure if some of that was because I had though the story would be more about Welsh independence/rebellion (and I have a soft spot for Here Be Dragons by Sharon Kay Penman). I wishlisted the ebook of Fair Bright and Terrible when it first came out didn’t immediately one-click. However, when the audiobook was released I was all over it like white on rice. Nicholas Boulton is a powerful draw card.

As is so often the case, I didn’t check the blurb before starting the book so I didn’t realise at first that the heroine of Fair Bright and Terrible is Eluned, the mother of Gwenllian (heroine of The King’s Man). To be honest, if I had realised that beforehand, it may have put me off because I really didn’t like Eluned much in the first book. She was a kind of rabid pseudo-resistance fighter for Wales and was dedicated to forcing her daughter to become the leader of a revolution. When it became clear that Gwenllian did not want to do that, Eluned was not pleased and it caused a rift between the two.

So, it was a most happy circumstance that I did read the blurb first. Because oh my lordy lordington I ended up loving Eluned. It takes skill and a deft touch to turn me from disliking to adoring a character and for that reason alone, Fair Bright and Terrible is a better book than The King’s Man. That said, I do think it would be much better read and understood in the context of the first book and would not work so well as a stand alone.

Of course, context is everything. For the first time, the reader gets to know what truly motivates Eluned and that makes all the difference. As it happens, when she was a young woman, married with an eight year old daughter (she was married off when she was something like 13 and gave birth to Gwenllian a year later, so UGH), she spent some months away when her husband was away at war and it was considered dangerous for her to stay home. There, she met a young man, Robert De Lascaux. They fell in love and had a passionate affair. Now, ordinarily I have a hard line about cheating and there’s no way around it, Eluned did cheat on her husband. But I was able to give it a pass because of the time period, the age she was when she was married off to her husband, that she had had no choice in the subject of her marriage and that said marriage was not a love match – it was a matter of property and alliances. I suppose other listeners may struggle with the issue but this was one of the extremely rare cases where it didn’t give me qualms.

When Eluned returns home, she is faced with a terrible choice. To leave her family, to take her daughter and run away with Robert and live as a shunned and fallen woman and risk that Robert may abandon her and any children they might have together at some future time, or to stay, for her family, her daughter and for Wales but forego the love of her life. And in that context, Eluned’s single-minded passion for Wales takes on a deeper hue.

Eluned had always been passionate about Welsh independence so it’s not like losing Robert caused it. But it welded her to that cause in a way that changed her. She had sacrificed something very precious for it and in order for that sacrifice to be worthwhile, she had to persist, even when it was an impossible task.

The story begins when all chance of Welsh independence has been forever quashed. Llewellyn and Davydd have been killed by King Edward I (Davydd was the first (prominent) man to be executed by being hanged, drawn and quartered by the way. Oh my lord what a brutal death – who even thinks up these things??), Gwenllian has put away her sword (mostly) and is happily married to Ranulf of Morency and the last of Eluned’s Welsh family hopes for rebellion have died. Her not-loved-but-not-really-hated husband (it seems he had a mental illness) had been away for 14 years on crusade and when he finally returns, it is in a box. She sinks into despair. All is for naught.

But then her 16 year old son, William, says he wants her to marry Robert De Lascaux for the rich properties and alliances it will bring to the family. He is prepared for her to say no at least and gives her the choice – she had been planning to go and live in a convent, cloistered from all. And even though Robert was the love of her life, so much has happened in between it is not Robert which is the big draw for her. No, it is that through him, she will be able to go to King Edward’s court and perpetrate her revenge on the hated Roger Mortimer, the man who betrayed Llewellyn and the man Eluned blames for all of her ills. Her last act will be an act of revenge and she cares not what happens to her after that.

Eluned is the strength and steel of the book. Robert is not a cipher and he is not a doormat. But in terms of character arcs, he does not go through the same kind of significant changes Eluned does. He loved her then and has loved her ever since. He has never married, keeping his memories of Eluned burnished bright in his heart. For him, marrying her at last is a gift and he leaps to take it. When he finds Eluned cold, distant and so unlike the passionate firebrand of his memory, he is at first dismayed and then despairing.

There were things in the book which, during the course of it, I wondered why they were there. They felt anticlimactic and left me a little nonplussed. But, I was wrong because in the end, it all makes sense and comes together neatly. It wasn’t what I was expecting but it was better than I could have hoped.

I enjoyed Robert and the way he had to open his eyes to what was before him rather than clinging to a somewhat faulty memory and wrong-headed beliefs. He certainly showed growth and was a competent and fitting hero for Eluned. But it was Eluned who shone here. And one of the best things I liked about Robert was that he recognised it and was content that it was so. He had no desire to dull her brightness and did not feel any need to compete with her.

Some of the things Eluned did in The King’s Man were still pretty bad but in context of the new information provided in Fair Bright and Terrible I found myself far more in sympathy with Eluned than I ever expected to be. And I just loved the way she owned this book. I’m a hero-centric reader so for me to be so taken with a heroine is a big thing.

I also loved that Eluned was in her early 40s and Robert was in his late 30s. Heroine’s older than 40 are relatively rare in romance and even more so in medieval romance.

What else? Nicholas Boulton is just brilliant. He brought it with this narration. His accents, his characterisation, his pacing and emotional deliver – all of it was faultless. Perhaps I’d have loved Eluned as much if I’d read the book but I can’t help but think that Nick Boulton’s narration added an extra layer to Eluned (in much the same way that I had a far deeper understanding and sympathy with  Maddie when I listened to the audiobook of Flowers From The Storm). I’ve written before, extensively, about how much I enjoy Nick Boulton’s narrations and this review is already too long. Basically, just all all the superlatives here.

The tl;dr: brilliant. I definitely recommend. For best context, listen to The King’s Man first.