It Happened One Autumn by Lisa Kleypas 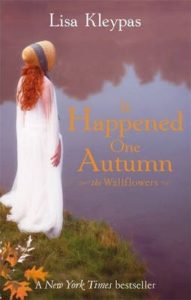 Why I read it:  I listened to Devil in Spring recently and it made me want to read Devil in Winter – I was advised to read It Happened One Autumn first so I borrowed it from my library.

What it’s about: (from Goodreads)  It happened at the ball…

Where beautiful but bold Lillian Bowman quickly learned that her independent American ways weren’t entirely “the thing.” And the most disapproving of all was insufferable, snobbish, and impossible Marcus, Lord Westcliff, London’s most eligible aristocrat.

It happened in the garden…

When Marcus shockingly—and dangerously—swept her into his arms. Lillian was overcome with a consuming passion for a man she didn’t even like. Time stood still; it was as if no one else existed… thank goodness they weren’t caught very nearly in the act!

It happened one autumn…

Marcus was a man in charge of his own emotions, a bedrock of stability. But with Lillian, every touch was exquisite torture, every kiss an enticement for more. Yet how could he consider taking a woman so blatantly unsuitable… as his bride?

What worked for me (and what didn’t): It took me quite a long time, relatively speaking, to read this book. It wasn’t even really the book. No, I struggled because it was a paperback. For various reasons, I much prefer reading ebooks these days and I found there was a certain reluctance in me to pick it up and hold the darn thing open so I could read it. It was a somewhat surprising revelation. I knew I preferred ebooks but I hadn’t realised just how much until now. I’ll still read the occasional paper book but I am firmly and forever in the ebook camp.

The story itself was quite fun – with a most unconventional heroine and one I enjoyed very much. Lillian Bowman is a brash, outspoken American girl, over in England with her family (including her younger sister, Daisy). The Bowman sisters have one goal while there and it is pursued with fervor by their, mother, Mercedes. Lillian is a bit of a tomboy, enjoying sport and activity and having little time for pointless rules of etiquette.

And she rubs Marcus, Lord Westcliff, decidedly the wrong way. Marcus is a strict, by-the-book, kind of earl. Lillian blows through his stuffy priggishness and self-restraint as if it were cobwebs. He doesn’t like it. So, when the Bowman family, along with various other guests arrive at the Marsden family seat, Stony Cross Park in Hampshire for a month-long house party, he is not happy about it.

Very soon however, the passion between them begins to reveal itself in another way. They don’t like each other but they can’t seem to stop kissing!

For Marcus, as the man responsible for the Marsden family line, it is important to him that he marry an appropriate woman from noble (and British) lineage – Lillian is totally unsuitable. And Lillian knows that she can never be what Marcus needs in a wife – her feelings for him appear to be doomed. However, over the course of the book, Marcus, who has always put duty before personal desire, begins to loosen up and see his future in a new way. It takes him a while to give in but eventually the power of the Lillian juggernaut is his undoing.

There is some delightful banter between them and I enjoyed their sparkling chemistry. Some of the double entendres were quite delicious – even though they were most often intended only for the reader and not anyone within the book. Alternatively, perhaps I just have a dirty mind… Moving on!

From a structural point of view, I felt the story took a little while to really get going and the sex, once it arrived, seemed to crowd into the latter section of the book. I liked the intimate scenes well enough but there was a kind of unevenness to the way the book played out which I noted.

Lillian’s father owns and runs a large US soap company and much  was made, in the early part of the story at least, of Lillian’s “nose” for scent. However, it didn’t end up going anywhere which was disappointing.

I did like the way Marcus completely capitulated to Lillian and his happiness in doing so but I’d have liked a little more specifics on how their marriage was going to look. Perhaps some of those things are mentioned in the later two books in the series? So much was made of how unsuitable Lillian was to be a countess – exactly what sort of countess she would actually be was something I was intensely curious about.

I enjoyed the friendship between the four wallflower girls, as well as the bond between Marcus and Mr. Hunt (Annabelle’s husband), all of which felt believable. I liked the way Kleypas showed that friendship often needs to bear some level of disagreement and tension and, as is apparent in the case of Sebastian and Marcus, is not always explicable.

What Else?: The reason I was advised to read It Happened One Autumn before Devil in Winter was because the villain of the piece (or one of them at least) is the hero in the latter book (and he’s the hero’s dad in Devil in Spring for those unfamiliar with the series. Hey now, it could happen – up until very recently I had no idea myself.) It takes quite a while in the book before Sebastian, Lord St. Vincent, reveals the levels he’ll stoop to but suffice it to say that he has a lot of work to do to convince me he’s reformed. Apparently the author pulls it off but Sebastian was pretty awful near the end of the story so I’m reserving my judgement.

“Much as it may surprise you, we’ve never needed lubricant in the library before now.”

Tagged with: historical, Lisa Kleypas, Wallflowers
Posted in: B reviews