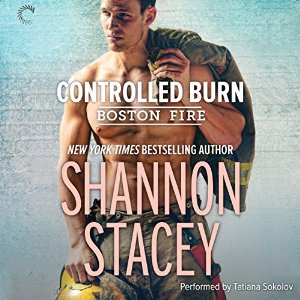 Why I read it:  I’m a fan of both the author and the narrator so I bought it.

What it’s about: (from Goodreads)  Rick Gullotti lives the good life. He fights fires, dates beautiful women—though none long enough so they cast wistful glances at jewelry stores—and has great friends. And thanks to helping out the elderly couple who own his building, his rent is low. But when concerns about their health lead him to contact their only son, his life starts getting away from him.

Jessica Broussard has no interest in leaving sunny San Diego or her cushy corner office for Boston, but her father—who happens to be her boss—dispatches her to deal with the grandparents she’s never met. She’s unprepared for the frigid winter, loving relatives who aren’t the monsters she’s been led to believe, and the hot, scruffy firefighter who lives upstairs.

At first, Jessica is determined to get back to her comfortable life as quickly as possible. All she has to do is talk her grandparents into selling their monstrosity of a house and moving to a retirement community. But she underestimates Rick’s dedication—and his considerable charm. Nobody’s taking advantage of his friends on his watch, even if that makes the tempting southern California girl with the long legs his adversary. Unfortunately for them both, the only thing more urgent than the matter at hand is their sizzling chemistry, and it’s quickly becoming too strong to resist.

What worked for me (and what didn’t):  Alas real firefighters don’t walk around in their turnout pants and no shirt. And, the firefighters I’ve actually seen in action, are mostly not as hot as the ones on book covers. They do exist though – I’ve seen the calendar. The firefighters in Shannon Stacey’s Boston Fire series however are the real deal. I enjoy their camaraderie and closeness and their sensible approach to a very dangerous job. Work health and safety is not seen as sexy but there is something awesome about a guy who does the right thing and doesn’t showboat. Rick Gullotti is a lieutenant in the Boston Fire Department. He’s not a grandstander after glory. A good day for him is when they put out the fire, save the people (and animals) and his team get home safe. It’s competence porn at its best.

Jessica Broussard is also very competent at her job of financial planner. While the idea of it makes me simultaneously yawn and panic, it’s something Jessica is very good at.

When Jessica intercepts a call from her grandparents’ doctor asking for a consult between them and her dad about assisted living facilities, she decides to go to Boston and be the help they need. She’s never met her grandparents. Her father has been estranged from them for well over the 34 years she’s been alive. In fact, Joe and Marie Broussard didn’t even know they had a granddaughter until she arrives on their doorstep. Jessica’s family has been her father alone since she was three and her mother ran off, never to be seen again. The idea of grandparents who might not actually be as bad as her father had painted them is just too much for family-hungry Jessica to resist.

Rick is at first suspicious of the beautiful woman who has done some research on the price Joe and Marie might get for their house, but he’s also pretty open with her about those fears. To their credit, for the most part, they act as adults and reserve judgement without jumping to conclusions. After all, Rick has been living in an apartment on the third floor of the Broussard’s house and paying a below-market rent for it. It’s not unreasonable for Jessica to consider Rick might have an agenda of his own.

As Jessica gets to know her grandparents, she and Rick begin to explore their growing attraction. They don’t jump into bed together at the first moment and even when they finally do, they realise there are problems ahead. The biggest one of course is that Jessica lives in San Diego and Rick lives in Boston. While Rick could be a firefighter in California, he loves Boston and his family live nearby. Not only that, but he has a brotherhood with the firefighters he works with. That’s a lot to give up. On the other hand, Jessica has a life and friends and, of course, her father in San Diego. While she could do her job in Boston (or perhaps start her own business or expand the existing one she and her father run, for example), she’s very reluctant to leave her dad on his own. Especially because her dad is going through yet another divorce. But Boston has her grandparents and they’re not getting any younger, as well as the new friends she’s made since her arrival. And, Boston has Rick.  This dilemma was realistic and I didn’t feel it was necessarily gendered in how it was portrayed. There were pros and cons for each potential outcome and these matters were considered by both parties over the course of the book. A long distance relationship might be okay for a while, but it’s not going to work forever. Sooner or later, one of them will have to move.

The story ended abruptly and didn’t have the neat edges of previous books. There was certainly enough to know that Rick and Jess would be together one way or another in the long term but it more hinted at that than spelled it out. I could’ve used an epilogue here (I am a fan of tying things up in pretty bows after all.)  Perhaps they will appear in the next book (which is also on my audio TBR and which I will be reviewing for AudioGals at some future date). (ETA: It was – all my neat bows are in Fully Ignited).

What else? As is usually the case, I enjoyed Tatiana Sokolov’s narration very much. I like the way her voice sounds in my ear and I enjoy her characterisations and the emotion she brings to the performance. It’s neither over or underdone, but just the right balance for me. As is fitting for the setting, many of the characters had Boston accents in varying degrees of intensity and the older cast members, particularly Marie and Joe, sounded old. Many of the firefighters sounded very similar however so I mostly relied on context and dialogue tags when they were together.

I enjoyed the adult conflicts and adult problem-solving in the story and I liked that melodrama wasn’t added to jazz things up. Controlled Burn had plenty of tension and action without going there.

Even though Boston is a big city, the novel had a small town contemporary feel, dealing as it did with the close-knit fire-fighting community. As a city dweller, it’s nice to see city-based stories as well as ones based in small country towns.

I knew I’d get a good book from a favourite author and favourite narrator and there is something wonderfully comforting in that which cannot be discounted. But apart from that, it was a good book. Sexy and sweet, with characters acting as adults. Win.