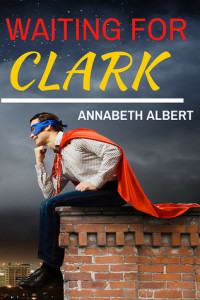 While the story is novella-length and relatively simple, I had the sense that the author knew much more about this pair than what was on the page and that knowledge informed and infused the story. Little snippets of backstory had more substance – I really had the strong sense that the author could tell me all if a) we ever met and b) we had the time and c) she didn’t think I was a weirdo stalker type all about them.

Bryce and Clark belong together; that much is very clear to all who know them but good reasons have kept them apart until now. The photo prompt which inspired the request to the author, and therefore the story, takes on extra depth having read the story. It’s nice to have a visual as well and the author has even included the rainbow lining of Superman’s cape.

I enjoyed Bryce’s group of friends, their ease with each other and the connection between the protagonists and I appreciated that there were POV sections from both main characters. The story does have some hot sex and even a bit of pathos, but it is mostly sweetly charming, with plenty of geeky pop culture references for those of us who swing that way. For extra bonus points, it’s FREE.

2 comments on “Waiting for Clark by Annabeth Alpert”