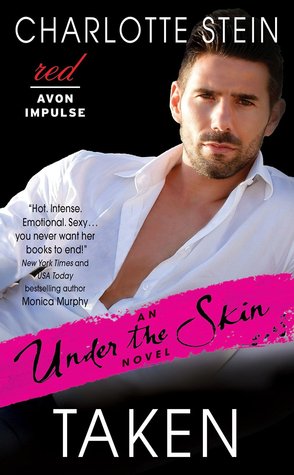 Why I read it:  I enjoy this author’s books so I bought it on release day.   Charlotte Stein and I follow each other on Twitter and chat occasionally. I think she’s lovely.  If I didn’t think I could be objective about her books, I wouldn’t review them.  But readers may wish to take the foregoing into account.

What it’s about: (from Goodreads)  It was just a prank I didn’t want to be a part of. I never meant to hurt anyone, least of all Johann Weir. You wouldn’t know that he sells literature for a living. He has these wild eyes—eyes that light something up in me—and he must be twice as big as I am, with strong, warm hands. Hands I try not to imagine everywhere.

He scares me. And thrills me.

But now the deed is done, and I have to face the consequences. He says he just wants to hold me here until the police come, but it’s been hours and I’m still here.

Chained to a pipe in his back room like a prisoner.

The only person I have to talk to is Johann, and I tell him dark, shameful secrets—secrets that involve the metal around my wrist and him standing over me. But I can’t stop. I need him to know everything. I need him.

Johann has his own secrets—ones he wants to tell me too. And more than anything, I want to listen. And maybe, before he sends me away, he’ll punish me.

What worked for me (and what didn’t):  As is most often the case with auto-buy authors, I didn’t bother reading the blurb.  When I saw someone excitedly tweeting about it, I took a skim and saw “chained to a pipe like a prisoner” and thought – oh, this must be some sort of sexy game.  Um, not so much.   The book begins in a dark place. It doesn’t stay there long and Han’s actions after his initial blunder (blunder is not the right word – what he did was way worse than a blunder), are honourable.  It is also true to say that all of the sexual contact in this book is entirely consensual.  In fact, Rosie is the aggressor in the sense that she has to actively persuade Han to do anything at all.   Once the doing gets going, the tables turn, but Han does not make a sexual move without Rosie’s enthusiastic consent.   Which is all to the good because his first actions did not make me warm to him.  Picking up a woman and chaining her in your basement is not cool. It is so far beyond not cool, I can’t fully describe it. Yes, he initially isn’t thinking clearly and yes, his plan (such as it was) was merely to “restrain” her until the police arrived (her friend was about to set fire to precious first editions in his antiquarian bookshop and Rosie was ‘helping’ her by not actively stopping her) but, let me make this clear: it is not cool to pick up a woman and chain her in your basement*.

(*unless it is a sex game with prior informed consent.)

Rosie spends very little time scared and Han spends A LOT of the time remorseful but he started well behind the 8-ball for my money.  I suppose then, it is a minor miracle that well before the end I liked him and cheered for their HEA.   It is certainly testament to the places I’ll allow very few authors to take me.  Very possibly, I’d have DNF’d a story with this premise from another author.

Charlotte Stein books do tend toward the subversive and (I don’t know this, I’m just speculating) I think she took a kind of unholy glee in taking this guy from villain to hero – in fact, there were times in the book where I felt kind of sorry for him as Rosie was quite forceful in her own persuasions.  It could be said that Rosie disrespected Han’s own boundaries many times.   It might be that I was able to “forgive” Han’s early action not just because it was out of character for him (something that bothers me a little because I never fully understood his brain fart) but because, albeit in other ways, Rosie imposed her will on him more than a few times and there was a kind of emotional justice to it.

If it was real life, I’d be telling Rosie to get the hell away from this guy who could have a brain fart to the tune of unlawful imprisonment.  But it’s not real life and I decided to go with it and see where it took me.

Other than the kidnapping, Han was actually very sweet (and yes, I know there’s a lot wrong with that statement).  He’s conflicted about his sexual desires – he doesn’t want to hurt anyone and he’s afraid he might, or, rather he’s afraid a partner might think he would.

Rosie herself feels like a fish out of water. As someone who has felt, for her whole life, that she doesn’t belong, that she’s out of sync with everyone around her, she is delighted by Han.  In a darker, non-romance book (written by Thomas Harris perhaps) she could be easily manipulated, but despite Han’s first impression (on me) he is not Hannibal Lecter or Francis Dolarhyde so, fortunately, she is safe.  There is a fantasy in romance fiction (one that’s not only confined to romance actually) about being truly known and seen by someone, when you think you are (or parts of you are) unlovable or unworthy or that you don’t belong. I have an affinity for those stories.  For the misfits and ones outside the circle – finding the one that “gets” them – and not just understands, but rejoices in it is pure gold.  This is the case with both Rosie and Han. They find in each other, the kind of acceptance and delight they thought could never be theirs.

What is fascinating to me, is that Ms. Stein twists it a bit and the reader can see where it could go if Rosie or Han were not “good”. Further, rather than a relationship which starts of sparkly rainbows and butterflies and then turns dark and sour and scary, this story begins with the dark and sour and scary. And then she goes and makes a romance, complete with HEA, out of it. Isn’t that astonishing?

That’s all very thinky isn’t it?  You’d think the book was all dark and menacing.  It isn’t actually. It’s very funny with Stein’s trademark humour and absurd (in a good way) exaggeration.

“We were going to take a nice, mellow bath together,” he says.

Then the paralysis gives way just a little.

“You want to take a nice, mellow bath together even though your cock could hammer nails?” I ask, and to be honest even hearing myself speak the words is exciting.

I get that thick pulse between my legs, barely an hour after my last orgasm.

“I appreciate that this is unusual in a world where men frequently answer innocent questions on dating websites with pictures of their dicks.”

And, of course, it’s also very dirty (also in a good way). The sex is earthy and messy and visceral, as I’ve come to expect from Charlotte Stein.

I feel like I ought to not like a book which begins with the hero kidnapping the heroine.  But I did.

What else? The cover model is definitely not hairy enough.  Han is big and dark and hairy in, I imagine, a sexy, darker and younger Hagrid kind of way.  Don’t let that well-groomed charmer fool you – Han is a lot more raw and non-GQ. Also, he wears cardigans. Which is unquestionably part of his charm.

2 comments on “Taken by Charlotte Stein”