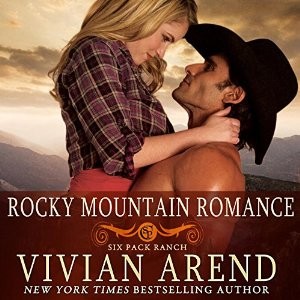 Why I read it: Someone linked to the audiobook on Twitter and I one-clicked that sucker straight away.

What it’s about: (from Goodreads) Second chances are the sweetest—and the hottest.

It took a spectacularly embarrassing break-up to knock Steve Moonshine Coleman off his lazy butt. In the ten months since that night, he’s changed his ways, and now that Melody’s back in town, it’s time for this sweet-talking cowboy to convince her to get back in the saddle with him.

A return to her veterinary position in Rocky Mountain House was always in the cards for Melody Langley. Getting back together with Steve? Never part of the plan. He had lots of potential but zero ambition, and there’s no way she’ll accept anything less than a man who can keep up with her, in and out of bed.

But the new-and-improved cowboy is impossible to resist, so Melody issues a challenge. Three months to prove he’s reformed. Three months of Steve orchestrating one sexual indulgence after another—wicked distractions from the old boys’ club Melody faces at work and Steve’s growing responsibilities.

He’s got one shot to prove with more than words what’s in his heart and soul.

What worked for me (and what didn’t):  I’ve been enjoying this series mostly on audio – Rocky Mountain Freedom isn’t out yet so I read that one – and I was happy when I saw there was a new book out.  Not only that, it’s a bit longer at more than eight hours of listening.  Steve Coleman hasn’t featured strongly in the series previously.  He was playing guitar and singing with the band at Trader’s Pub a while back when a woman dumped a pitcher of beer on his head but other than that, he was mostly unknown to me.  (There’s a family tree on the author’s website which is helpful. Go here.)

It turns out that Melody Langley dumped the pitcher of beer on Steve’s head because he was unreliable and irresponsible.  But by the time the book begins, Steve’s not like that anymore.  I heard a little about how Steve was laid back before and tended to take a que sera sera approach to things but there wasn’t a lot of evidence for it in the book proper.  I suppose that may have been because to show him in that light may have made it difficult for me to like him.  That said, I did feel like Steve was the supplicant for much of the book and from time to time, I felt a bit sorry for him. That’s complicated by the fact that Melody does agree that they were more fuck buddies than boyfriend/girlfriend and if that’s the case, his lazy attitude seemed to fit with what their relationship really was, rather than actually be a problem.  It’s also true that I’m a hero-centric reader so maybe that had something to do with my feelings about Steve.

Anyway, Melody comes back to Rocky Mountain House to take up a role with the local veterinary practice.  She’s been away for a year pursuing further studies regarding large animal medicine.  She is delighted when her boss decides to leave her in charge while he goes on a six week holiday.  This causes friction between the other vet dude who feels he should be in charge and with some of the more old fashioned ranchers who are suspicious because she’s (shock! horror!) a woman and also because she brings with her some new methods she learned in the previous year.  Melody is entirely capable and I appreciated that she was a good vet and could hold her own with the ranchers.  I could also understand why she wanted to deal with these issues herself and not have Steve going off half-cocked about it.  If he’s all protective she’s left with the role of “helpless woman who needs a man to sort things out”.  That said, I, again, had some sympathy for Steve late in the book when he is pushed past his limit by an asshole.  I thought Melody’s reaction was to treat him like a little boy and that sat uncomfortably with me.   Steve isn’t perfect but his heart was in the right place and he did believe she was capable and smart and well able to handle the demands of her job.  It’s just that when dudes talk shit to him, he wants to say something.  In some respects, he was on a hiding to nothing – if he said nothing, he’d have looked bad (at least, he would have looked bad to me – I’d want my man to stick up for me – perhaps not actually fighting though) but taking action gets him in trouble too.  As you can see I’ve given this a lot of thought! LOL.

The setup is that Melody gives Steve three months to “prove himself” to her.  That made me uncomfortable – as I said above it was the supplicant thing I didn’t like.  It made the relationship feel unequal to me.  I don’t want either party to feel less than.   The blurb suggests that the three months is to rock her world in new sexy ways but that is a little misleading because it’s not just the sex.  Now if it was just sex, I could probably think of it as a sexy game and be fine but the rest? Not so much.

That might sound like I didn’t like the book. But that’s not correct. I did. The three months weren’t a major feature of the story and fortunately, the relationship is sorted well before the time limit is up.  Most of the time, they did come across as equals and I enjoyed their connection and banter and the sex was, as usual, dirty, creative and hot.

I also liked how Melody, who had been raised by a single mother, found family with the Colemans and the girl bonding she did with Jaxi, Vicky, Ashley and Alison.

I’m no expert but it seems to me that Ms. Arend knows a bit about ranching or, at least, has done her research. Her descriptions give the book a reasonable flavour of farm life without being boring or unrealistic – it’s a good balance and explains all those Coleman muscles!

There was a subplot with Steve’s dad which didn’t go very far – but maybe that’s something that will be furthered in Trevor’s and/or Lee’s book.  Jesse is starting to be a little less of an asshole – he’s got a way to go until he’s forgiven though – he’s still pretty awful to Vicky.

What else? The narration is very good, as it usually the case with Tatiana Sokolov (aka Tanya Eby).  I like her voice and the way she delivers the story.  It’s true that most of her male voices sound very similar so I think it’s best not to listen to multiple books in a row but that’s not a big deal and it’s also not rare – many female narrators have the same limitation. There were a few times when there were odd pauses as if the sentence had ended but it hadn’t quite yet but again, they weren’t a major issue for me.

The sex is dirty and Ms. Sokolov delivers the intimate scenes without any over the top emoting and without apparent embarrassment. The words make a difference too of course because there are just some phrases which sound ridiculous out loud but which can maybe pass on paper.  Maybe.  Ms. Arend writes steamy scenes which aren’t silly and they sound great aloud.

Despite a few concerns I had about the way Steve was portrayed/perceived, I did enjoy the book. I’ve come to trust Ms. Arend to give me a reliably good, entertaining and sexy story.  Given that I trust Ms. Sokolov/Eby to deliver on the narration, it’s no wonder the series is an autobuy for me.  I do love those Coleman boys – fortunately for me, there are a shed loads of them.