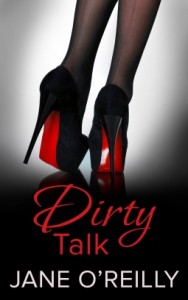 Why I read it:  I was provided with a review copy from the publisher via NetGalley.  Note, the author and I follow each other on Twitter and chat regularly.

What it’s about: (from Goodreads)  When words are not enough…

Amy can’t believe she’s let herself be bullied into a write off with the odious Dave. Now she needs to produce twenty pages of a story by next Friday – the content is to be of a very particular nature!

Fortunately Amy has an advantage: she’s a secret – and voracious – reader of erotica and she knows just what turns her on! But when it comes to putting her own words down on paper embarrassment and nerves have left her with a severe case of writers block…

What worked for me (and what didn’t):  One look at the title will give readers a fair idea of what they’re in for with Dirty Talk.  Jane O’Reilly gives good sex like whoa.  What makes the story even better though is that she also delivers on characterisation and romance.  This novella is just over 60 pages long and that’s not a very high page count to do all that.   In fact, I was just marvelling over this very thing, and how completely I’d bought into the HEA, when the story took a slight downturn when an unexpected revelation is made.  But more about that later.

Amy has been friends with Jules and Phil since college. She tolerates Jules’ boyfriend, the odious Dave, for the sake of her friend.  But Jules is different when she’s with Dave and Amy doesn’t like the different Jules all that much. My sense was that Amy didn’t have that many friends that she was all that keen to throw one away but Dave smirks and belittles Amy every chance he gets and she doesn’t enjoy Friday nights at the pub as much anymore.    When Dave challenges Amy to an “erotic write-off” Amy, pushed to her limit, bites and she suddenly finds herself having agreed to write 20 pages of erotica before the following Friday’s pub meet up.

Amy has had a crush on Phil since forever but she’s always regarded herself as not his type and she values his friendship so much she doesn’t want to risk losing it to make a move. Also, she’s shy. Making moves is really not her thing.   She doesn’t seriously believe Phil could actually like her like her and so she maintains the status quo.  In fact, thinking about it now, that is probably part of why she’s stuck with Jules so long.  Jules makes no effort to curb odious Dave’s meanness but at base, I think Amy wonders if she’s worth it.    Perhaps it was because that kind of character resonates with me but I also think the characterisation was deft and spare – in any event, I was inside the story very quickly and very much on Amy’s side.  Which, as a hero-centric reader, says something I think.

Amy finds it incredibly difficult to write anything remotely sexy.  I laughed at her description of her writerly agonies.

At the bookshop, I keep a notepad on my desk, and scribble in it every chance I get. Every time someone comes in, I jump about three feet in the air and flip the notepad over. The last thing I want is for someone to ask me why I wrote ‘his cock was big and long’ and scribbled it out. Several times. By half four, I’ve written another three sentences. I’ve also drawn 78 cartoon penises.

Phil doesn’t seem to like odious Dave much either and when he offers to help Amy write her 20 pages, one thing leads to another and Amy learns about the side of Phil she’s only ever fantasised about before.  The sex is super hot and super dirty.  There is a raw realism to it which is visceral at times.

‘Here,’ he says, gesturing to his mouth.

It seems to me that all Phil was really waiting for was (pardon the pun) an opening.  Once he gets a hint that Amy is interested, he’s all in.  Because they’ve been friends for so long, they do know each other very well and because of that, the short timeframe the book in which the book takes place was no barrier for me.

What else? Dirty Talk was seriously heading in to A territory and I had all the feels when something happens which causes problems for Amy’s and Phil’s HEA.  I don’t want to say what it is because it is spoilery.  Perhaps because I liked Amy so very much however, I found myself very disappointed in Phil.  I wasn’t quite ready to forgive him even when Amy did.  I wasn’t convinced there was enough grovel and I had questions about the [redacted] which weren’t answered in the story.  I wanted all the dirty (but not in the good way) details so I could work out where on the spectrum Phil actually stood.  I was also a little ticked that Amy was the one who went and sorted it out.  On the one hand, yay for empowered women who go and take what they need.  But on the other; not enough grovel.

My sense was that Amy had been the supplicant in many of her relationships (including her friendship with Jules) and this last little bit made me feel a little like she was being placed in that role again.  In some respects, the author did her job too well in the early part of the book because I was quite fierce about Amy and thought she deserved better.

I’m sure Phil could have earned his way back into my good graces given enough time but there wasn’t quite enough in the book for me to feel justice was done.  I did believe in the HEA and I did think Phil and Amy were great together and all their (to be gained new) friends will be jealous of their awesome sex life (which said friends will intuit because of all the pheromones which follow the happy couple around), but I felt the emotional justice at the end was a little underdone.