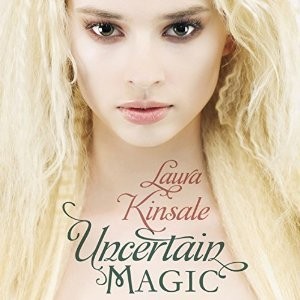 Why I read it:  This one is from my own audiobook library.  I listened over Christmas as a special gift to myself.

What it’s about: (from Goodreads)  As a lovely heiress, Roderica Delamore should be a prize catch–except for her shameful secret. She has the ability to hear the thoughts of those around her. Even her family and close friends can’t hide from her strange gift. Knowing that she can never marry, for no man could bear it, Roddy still longs hopelessly for a family of her own. Until she meets the man she’s been waiting for–the Earl of Iveragh, a mysterious Irish aristocrat whose thoughts are entirely closed to her.

The impoverished Devil Earl is damned in society by dark rumor and innuendo, and, for all she knows, he could be a liar, a rogue, or much, much worse. But Roddy must dance with him at midnight on All Hallows Eve, and entrust her life–and her heart–to a riveting stranger, called by his torment into the faerie mists to discover what she most fears about herself and her own magic.

What worked for me (and what didn’t):  I read this book ages ago and it was originally published in the 1980s.  I had fond memories of it.  Listening to it, the story didn’t feel dated – or, at least, it felt dated in the time it was set, which is late Georgian England and Ireland.  It’s quite an unusual book and different to Kinsale’s other romances in that it incorporates paranormal aspects.  Roddy Delamore can hear the thoughts of others and for her entire life, this has set her apart.  People see her as a freak and she feels she will have no life of her own as no husband will want her.  When she happens to meet Faelan Savigar, the Earl of Iveragh, he is the only person she’s ever come across who’s mind is closed to her.  It is pretty much that which decides her on him for her husband.  She is wealthy and he needs money to repair his broken down estate.  He is 35 and she is only 19 and very pretty and he can’t quite understand his good fortune to have attracted her but he is not one to look a gift horse in the mouth.

Roddy is unusual not just because she can read the thoughts of others (animals too).  She has had this talent all her life and has relied on it. Consequently, she lacks development in the area of interpreting the actions and words of others based only on what the rest of us have to work with.  This makes her vulnerable to Faelan because she is not as cautious of him as everyone else it. Because of this and because it suits her, she disregards the warnings about him; how he is either mad or evil, his reputation for duelling and despoiling innocents, the rumour that he killed his father by throwing him off a cliff when Faelan was only ten years old.  She chooses to believe in Faelan’s goodness in spite of it all.   Actually this naivete is a lucky break for both of them because of course Faelan is neither deluded nor evil – he is a romance novel hero.  The explanation is long in coming and not explored well.  And there is a faerie aspect to it which is convenient to say the least and which could have used more exposition.

Uncertain Magic is an unusual historical romance for another reason.  The couple are in love almost from the start and are open about their feelings (even when they do not always believe the declarations of the other).  They have an active sex life and, as they are married early in the book, the love scenes appear early on too.  The development of the romance is not the same structure as most other romance novels and I think this might throw people.  Essentially, Roddy and Faelan love each other but they have to work through the morass of what is causing Faelan to lose time – is he mentally ill?  Is he evil and in denial?  Roddy is keeping her “gift” secret from Faelan and that is a barrier to their HEA too.  I liked the structure but it is different.

The historical detail of the punishing laws made by the Protestant ruling English over the Catholic Irish was heartbreaking and there were scenes in the book which made me fume with futile rage.  Injustice piled upon injustice bred hundreds of years of conflict and all over a different Christian religion. I don’t know for sure but I assume that the examples given of the laws which had been inflicted on the Irish Catholic population were accurate.  They felt authentic to me.

I liked Faelan very much.  I’d have liked more of him and after the end of the book, there were questions I had to which no answers were given. I see the flaws in the story but I liked it very much anyway. I think the part which won me over was that they were in love so early – which is kind of perverse but there you go.

What else? The reason Uncertain Magic gets an A review from me instead of what would have probably been a B for the book alone, is all in the narration.  Nicholas Boulton is just brilliant.  Laura Kinsale made a wise and wonderful decision when she chose him to narrate her audiobooks.  He has a wonderfully deep voice and he can infuse it with any number of accents or characters.  His Faelan voice was mostly English with just a hint of Ireland – what one might expect from a man who was, after the age of ten,  raised and educated solely in England.  It was not evidence of a lack in Mr. Boulton’s abilities because there were numerous Irish characters and he performed their various accents with aplomb. The female voices are softened rather than falsetto caricatures.  The emotion Mr. Boulton can inject into his narration, the rich characterisation he gives to the players, his attention to detail and his obvious respect for the text, all serve to make him the best narrator going around at present.   Honestly, he could probably make a shopping list riveting.