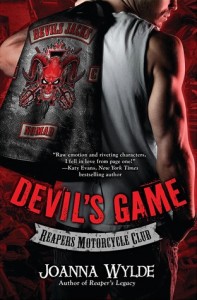 What it’s about: (from Goodreads)  Liam “Hunter” Blake hates the Reapers MC. Born and raised a Devil’s Jack, he knows his duty. He’ll defend his club from their oldest enemies—the Reapers—using whatever weapons he can find. But why use force when the Reapers’ president has a daughter who’s alone and vulnerable? Hunter has wanted her from the minute he saw her, and now he has an excuse to take her.

Em has lived her entire life in the shadow of the Reapers. Her overprotective father, Picnic, is the club’s president. The last time she had a boyfriend, Picnic shot him. Now the men in her life are far more interested in keeping her daddy happy than showing her a good time. Then she meets a handsome stranger—a man who isn’t afraid to treat her like a real woman. One who isn’t afraid of her father. His name is Liam, and he’s The One.

Or so she thinks.

What worked for me (and what didn’t):  There were a lot of things to enjoy in Devil’s Game – most especially the heroine, Em Hayes.  As the daughter of the Reaper’s local President, she’d grown up knowing Club culture and understanding her place in it. She’s protected in many respects because of her dad’s position but at the same time, she feels stifled as well.  Reese “Picnic” Hayes knows what guys are like, being one himself, and he doesn’t hesitate to chase off unworthy contenders.  This has left Em in the unfortunate position of being a virgin at the ripe old age of 22.  After she is kidnapped (which occurred in Reaper’s Legacy), she has something of an epiphany and decides to push back against some of the Club culture she dislikes and strike out on her own a bit more.

The book actually starts before the kidnapping to give some background on both Em and Liam “Hunter” Blake and then moves to “present day”. This is somewhat confusing as in this book “present day” means before the kidnapping, which is before the end of Reaper’s Legacy.  However, once I’d oriented myself in the timeline it was all smooth from there. The reader gets to experience the kidnapping from Em and Hunter’s point of view and fill in those deliciously scant details from the previous book.  It is also very clear from early on that Painter is never a contender for Em’s heart. I liked the way that the previous book suggested there might be a love triangle (because it was from Sophie’s perspective) but that, with the right light shone upon the same facts and from another perspective, it makes a big difference.

I liked Em very much. She stood up for herself and didn’t take any shit from anyone.  Some of the things she said had me laughing and cheering at the same time.

“You want to try saying that a different way?” she asked, putting her hands on her hips. “Only this time, listen to your words very carefully in your head first. Then ask yourself whether you ever want me touching your dick again.”

She was very much aware of when something was serious but she also knew male posturing when she saw it and some of her solutions were pretty neat.  I had to laugh when she called a spade a spade though.

God, it would be so much faster if they just did a side-by-side penis comparison.

I liked that she told Liam she was a virgin but wasn’t an apologist for it either.  I felt she was always in charge of her sexuality even if she hadn’t had very much experience.

“I mean I’ve Never. Had. Sex ,” she told me, spacing out her words carefully. “True story. You got a problem with that? Because you’re looking at me like I’ve got herpes and that’s not working for me.”

I did think Em “forgave” Liam much too quickly after the kidnapping.  Even though Liam suggested a perhaps unusual solution to her animus, it didn’t really solve anything and, because I hadn’t seen their months of conversations and emails and phone calls, I didn’t have the same sense of connection to him that Em did.  I missed that courtship aspect.  Liam initially got in touch with Em via Facebook and they started texting and talking on the phone for hours.  But all that was told not shown and I would have liked to have seen at least some of it.  I could see that there was a connection between the pair and certainly they had smoking hot chemistry but I wanted a little more conversation.

However, when Liam and Em start seeing each other again after the kidnapping, they both realise that such action will have significant consequences for them and their respective clubs, so it is not something they undertake lightly.  I liked the sacrifices that each made to be with one another and I liked that Liam wasn’t afraid of Picnic – something that set him apart from other potential love interests *coughPaintercough*.

I can’t imagine anything more fun than spending a holiday in the home of the man who wants me dead. Like our own fuckin’ Hallmark movie, but with live ammo.”

What else? Much of the book was about the shaky truce between the Devil’s Jacks and the Reapers and possible incursion into their respective territories by the drug cartel/s from Mexico. It didn’t really resolve in this book – that is very much an ongoing story arc.  I felt like it took up a bit too much of the story here – I wanted more of Em and Liam together.  When they were on page together they just lit up my reader and they were the best parts of the book.  The stuff about the MCs and their problems was of less interest and in fact, some of it was over my personal line of what constitutes a hero.

Which brings me to my biggest problem with the book.  In Reaper’s Property, I felt like Ms. Wylde took great pains to be vague about the criminal activities of the Reapers and to justify their violence – after some thought, I decided that it was a version of fantasy romance for me – extreme perhaps but, as a fantasy, I could get on board with it.  Horse, the hero of the first book, stayed shy of activities  I couldn’t overlook and in Reaper’s Legacy, Ruger pretty much did the same.  But here, Liam is a killer.  The book doesn’t hide or try to make pretty, the fact that he has killed many people and will do so again. And that made me very uncomfortable.  When I thought about Em and Liam together, I really had to blank that from my mind and pretend that “Hunter” was a different person altogether.  That kind of split personality in my reading is not something I could sustain in the long term I don’t think.  If the series gets too much darker, as much as I love the author’s writing style and the way she writes dialogue and builds characters, it may be that I won’t be able to continue.  I’m not there yet – and that more than anything is testament to how much I enjoy all the other aspects of the series.  If I didn’t, I would have stopped with Devil’s Game.

As I said above, there was a lot to like about Devil’s Game and as much as I sometimes resented time spent on the conflict between the MCs and the cartel/s, I am still curious about how it might pan out.  I have a couple of theories but it could be I’m boxing at shadows and seeing conspiracies where there are none.

Em shone for me in this book.  I’m usually a hero-centric reader but for me, Devil’s Game was very much Em’s story and I liked how confident she became over the course of the story.  I liked how she negotiated her relationship with Liam and drew very clear lines which were not to be crossed ever and I believed Liam valued her enough not to cross them ever again by the time the book finished. Em was clearly in pole position for Liam going forward.

There was one part early in the book where I was a bit worried.  I read this (from Liam):

“Is this the part where you confess you’re actually a man?”

and thought to myself: oh no, please don’t go there.   Happily, Liam didn’t. He followed up with this:

“’Cause if you are, I’m totally into that. Whoever did your boob job is a fuckin’ artist.”

Liam, in his own way, took a little stand against transphobia.  I suppose there will be people who don’t like the way he did it.  It was certainly unique.  But I decided to take it as a positive.

My grade for Devil’s Game is a little lower than for the previous book.  That is partly down to there being not quite enough Em and Liam for me here (what there was was great however) and partly because I was really uncomfortable that Hunter was a killer.  It’s not a judgment on what other people think of the story of course, but even in the In Death series, I had to kind of blank from my mind that Roarke was involved in some pretty vicious and bloody murder – at least in Roarke’s case, that was in the past and there were some extenuating circumstances. In Devil’s Game, Hunter kills for the Devil’s Jacks and I couldn’t find anything noble in that I’m afraid.  However, YMMV and that is perfectly okay.