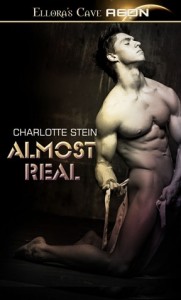 Why I read it:  I was fortunate enough to be provided with a review copy.

What it’s about: (from Goodreads)  When Margot signs on to pose as one half of a married couple for the cloning company she works for, she doesn’t expect her partner to interest her in the slightest. It’s just a job—albeit one that comes with a fake marriage. To an undeniably sexy fake husband.

Sergei is an immense stone fortress, cold and calm and—worst of all—so compelling Margot can hardly stand it. She’s supposed to be protecting and maintaining the labs, but all she can think about is unearthing the man beneath the controlled façade and wrapping herself around him.

Even if the man she uncovers is far more than she ever bargained for.

What worked for me (and what didn’t):  I’m a fan of Charlotte Stein and I love her to bits on Twitter.  That said, this wasn’t my favourite of her books.  The first … half? of the book was very internally focused on Margot.  In fact, it was so focused on her/in her head, I was only sure of her name because of the blurb. The book is told from her deep first person POV and it isn’t until the second half of the story that there is much dialogue (not that there is a lot because Sergei isn’t a big talker) or much emotion (there is much more of this in the second half and this was the part of the story which shone to me and which I liked best).

It is a sci-fi book but the world building is thin.  I *think* that was a deliberate stylistic choice* but unfortunately it didn’t work for me and the way my brain works.  We know that Margot and Sergei are in a fake marriage and their task is to protect the clones growing in the lab below their house and transport them (via some kind of underground railway?) to the company.  I gathered the clones are used as a kind of slave labour.  I didn’t exactly understand why Margot and Sergei had to be married.  (Why the fake relationship?  Who was scrutinising them? Was cloning not an acceptable public practice in this world?  Did people not know?  If so, how did the company get away with that – don’t most of the clones look the same?)  The first half of the story felt a little to me like that movie Cube.  People wake up and they’re in a white cube and they don’t know what’s going on.  In some respects, I felt that the beginning of book was a white cube.  There were no hooks for me to hang things on, no windows into the world I was in.  I spent a lot of the first half mentally scrabbling around for “handholds”. There was an atmosphere of claustrophobia, almost suffocating at times which was very well done even if I found it somewhat uncomfortable.  Even so, my favourite line in the book was in Chapter one:

In the second half of the story, it’s not so much that the world building expanded – because it didn’t really.  But I liked it better because Sergei and Margot started to have a relationship and I found that compelling and engaging. The sex scenes (as usual) were very hot and told me a lot more about Sergei than I had heretofore known.

I had some worldbuilding questions about the ending and exactly who threatened their lab (I wasn’t clear on that) and what would happen afterwards.  By the end, I was very curious about the world contained in Almost Real and I wouldn’t mind spending more time in it and exploring it a bit more.

Margot’s heroics at the end of the story were majorly kickass and I could see the action playing out on the mental screen in my mind.  Even though I felt the “world” was a bit thin, I had no problem picturing the lab and the elevator and the office area and the carnage.  That part especially felt quite movie-like to me.

What else?  *I say deliberate stylistic choice because that is what it felt like – stylised.  I’ve read other books by this author and this was a departure in style and tone in many ways.  It was kind of… like the movie Moon –  where, for the first part I was also a bit in the dark (it also had that same, slightly claustrophobic, close, feel to it).  I think it says something about me and the way I read and take in information that the beginning of Almost Real didn’t quite work for me. Just because the style didn’t work for me doesn’t mean it won’t be a ripper for other readers.  I’m not a big fan of ambiguity and this is, I think a book, where the reader has to use their imagination more than usual.(Which probably says something about my imagination).

For me, it’s a C+ but I’m really not sure you should take my word for it.