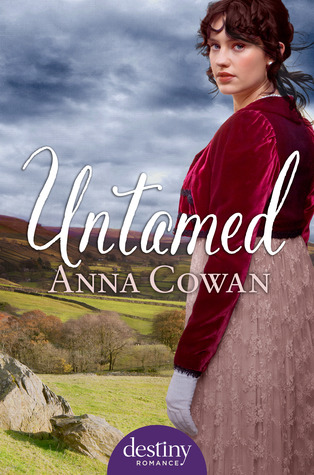 Why I read it:  I received a review copy from the publisher via NetGalley.  It’s been on my radar for a while now.
What it’s about:  (from Goodreads)  Outspoken and opinionated, Katherine Sutherland is ill at ease amongst the fine ladies of Regency London. She is more familiar with farmers and her blunt opinions and rough manners offend polite society. Yet when she hears the scandalous rumours involving her sister and the seductive Duke of Darlington, the fiercely loyal Katherine vows to save her sister’s marriage – whatever the cost.Intrigued by Katherine’s interference in his affairs, the manipulative Duke is soon fascinated. He engages in a daring deception and follows her back to her country home. Here, their intense connection shocks them both. But the Duke’s games have dangerous consequences, and the potential to throw both their lives into chaos…
What worked for me (and what didn’t): Have you ever had the experience of seeing something in your peripheral vision more clearly than when you look straight on?  I had that a few times when reading this book.  That sense of something just outside my grasp.While I had some problems with the story, there is also a lot to like. There is some lovely poetry in the writing.

This was the piano as she hadn’t even known it could be played – subdued passion that she was fairly sure wouldn’t be allowed in public. One melody tripped lightly ahead of the other, follow me. The second was slow; it would never catch the first but ran under it, as deep as an ocean.

She had never heard anything so beautiful.

There is also subtlety and cryptic phraseology from time to time.  There are multiple and carefully woven plot threads. A little here, a little there.  I felt, for most of the book, like I was playing a particularly elaborate game of cat’s cradle – it had the potential to be anywhere on the scale from a beautiful and magnificent creation to a crazy tangled mess.

It isn’t a book you can judge until you finish it.  Until you see the creation at the end, what you have made with your fingers of the threads interwoven through the story, it is unformed and hard to interpret.

In thinking about this book, I decided that I mostly got the subtlety (something I sometimes struggle with) – for example, I immediately understood what Kit’s brother Tom meant when he said “I had such hopes”.  But the scene between Darlington and Kit in the pub playing cards and discussing apples was lost on me.  Sometimes (and this is an embarrassing confession) I try and see something in a shop window more closely and end up smacking my head on the window glass.  I felt a little like that with the apple scene.  I tried to peer and hit my head (metaphorically). Darlington had me “hitting my head” a few times actually,  as gradually the many layers of him were peeled back, as his tortured backstory was slowly parsed out.

I had to concentrate reading this book but it was worth it because the words on the page are often beautiful.  And, if I thought S.U. Pacat’s Captive Prince Vols 1 and 2 were sometimes opaque, this book was even more so. Like a complicated puzzle, it required thought.  Things were not neatly laid out for me to merely breeze by and clutch.  I had to find them, a complicated memory and matching game in some ways.  So it is very much a book where the reader’s input makes a difference I feel.

And, it is only at the end, one can decide just how enjoyable the experience was.

I’m deliberately not going to say very much about what happens in the book.  It is a book which you need to discover for yourself I think.  I will say that it has humour and fun along with the dark and angsty (and there is – the hero is a very tortured cross-dressing duke – and that, right there, should be enough to tempt anyone in my opinion!).

‘Please allow me,’ said the Duke. ‘Reading the Times is like having a conversation with an old, slightly senile acquaintance. I am always charmed to begin, which admirable sentiment is followed by a strong desire to hurry the conversation along, and before the end I find myself fighting the temptation to do something mad and wicked.’

He stood with a swish and leant gracefully down over Tom’s shoulder. ‘I always lose,’ he said, low and full of laughter. ‘I make a point of it.’

And here, where the distance between Katherine’s and Darlington’s respective stations in life is highlighted most effectively.

He finished the beer in his glass and looked, all disapproving entitlement, at the empty bottom.

‘Katherine,’ he said. ‘Please explain these coins to me again. The smallest one, what’s that called?’

‘You should write a travel guide when you return to London,’ she said, picking out the right number of coins from the pile in his hand.

‘What a marvellous, delightful idea! I will be able to explain about farthings and pence and – what’s this one?’

He looked blank for a moment. Then, ‘I have never heard of this button,’ he said, outraged. ‘Is it a currency the working poor are keeping to themselves? How much is a button worth?’

‘Buh-ton,’ she said. ‘You know – that pesky little device you deal with twice a day, at least . . .’ She trailed off, realising that of course he didn’t deal with buttons. His valet likely did that for him. Fingers against the Duke’s skin for a moment every morning and night. ‘Er,’ she said, ‘never mind.’

There is also a beautiful and redemptive story involving Kat’s sister Lydia and her husband Lord BenRuin.  I’d have happily read more about them, but even so, I didn’t find their story incomplete. My liking for this part of the story kind of surprised me because the Duke of Darlington has such a presence on the page that he tends to overshadow anyone else.  Yet, these two caught and held my attention even against such temptation.  The other secondary characters were generally nuanced and not superficial.

In terms of the romance between Kat and Darlington I sometimes felt either that that the author knew things that I didn’t know  (and therefore had not felt the need to be more explicit on the page) or that I had not grasped entirely what I was supposed to grasp (ie, it was there, but I missed it).  There were parts of tender beauty and delicious angst. But there was perhaps one of the threads which held it all together I can’t help but think I lost somewhere along the way leaving me with a vague sense of incompleteness. I would have liked the second sex scene to have been a bit longer as I felt there was an important point which was kind of glossed over.

For all of Darlington’s many manipulations, I did absolutely believe in his love for Kit,

But more than that, it was how it had to be. If she was here, then he would be here beside her.

In many ways, Kat had the “male” role in this book (and in the couple) and Darlington had the “female”.  I enjoyed very much what the author did with the gender roles here (which frankly, could be a whole post in itself). Kat is not your usual heroine.  She is described with words such as “coarse” (her hair), “rough” (her hands), “crooked” (her nose, 2 of her fingers).  She is not pretty like the girl on the cover.  She strong and fierce and I liked her.  And, as the book progressed, I could see why Darlington felt the way he did.  And Darlington is not the usual hero either; he’s terribly vulnerable.I saw some Twitter talk indicating there were historical inaccuracies in the book.  It’s not something that really hit my radar (apart from perhaps apparent acceptance “the Outfit”) but I’m certainly no expert – everything I know about the Regency I learned from romance novels or TV.What else? Harking back to my cat’s cradle metaphor (which I think you will agree I have now soundly beaten to a hideous death), on the scale of magnificent beauty or tangled mess, where do I sit?  I lean toward the former but it was not entirely that.  I think the concept and not-the-usual of it deserve mad props and there was much to like.  And I’m pleased to say it was not a tangled mess. As this is the author’s debut, I can only expect her craft to improve with time and I look forward to reading more of her work in the future.So: the creation in my hands at the end? I think it was an ambitious and curious thing, with parts full of beauty, parts of mystery and overall, pleasing to the eye.

Tagged with: NetGalley
Posted in: AWW2013, B reviews

12 comments on “Untamed by Anna Cowan”