Thank You For Riding by Meg Maguire 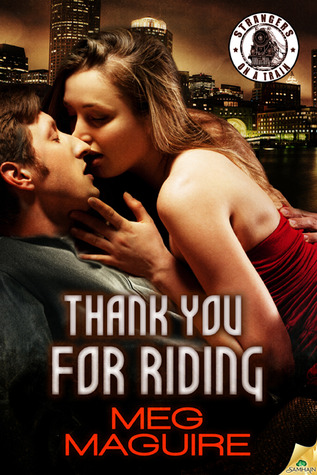 Why I read it: I had this one pre-ordered from Books on Board too and downloaded it before the bad news hit. Cara McKenna (aka Meg Maguire) is pretty much an autobuy for me.
What it’s about: (from Goodreads)  The last train of the night might just be the start of something good.A Strangers on a Train StoryStung ego or not, Caitlin’s relieved her fizzling relationship is over, even if she’s just been unceremoniously dumped between the copier and a dead ficus tree. At least she has an excuse to ditch the lousy office Christmas party in time to catch the last subway home…to her cat, and early-onset spinsterhood.

Instead of a lonely, chilly ride, she gets an unexpected holiday treat in the form of a nearly familiar face—a handsome stranger she encountered last week at the blood drive.

At the end of the line, neither can seem to let their chance meeting end—until their extended flirtation finds them facing the prospect of spending a frigid winter night locked in an unheated subway station. And they wonder if keeping each other warm is merely a delightful form of rebound therapy…or a memorable first of many more dates to come.

What worked for me (and what didn’t): I liked this one very much.  It wasn’t as hot as I had been expecting, even having seen interviews with the author where she said that the circumstances the pair find themselves in do limit their activities.  But, looking back, it was just right.  Caitlin first spies “Mr. Cute” (who later introduces himself as Mark) when they are both donating platelets at the local blood bank.   Some weeks later, after being dumped by her not-very-interesting boyfriend at the office holiday party, they meet on the train home.  When they get stuck in the subway station for a few hours, they share conversation, body heat and even some body fluids as their attraction keeps them warm.
It’s not an erotic story.  There is plenty of conversation and the story ends with a hopeful happy ending but they are far from exchanging vows.  It is, essentially, a very long meet-cute and I don’t mean that in any negative way.   I think the story is actually the perfect length.  The couple seem so well suited that I have no problem believing they will go on to have a long and successful relationship.  I liked the way they talked to each other and took care with each other even in the short space of time they were together.  They were honest and daring – Caitlin in particular decided to eschew any kind of emotional games and just put herself out there.  And, Mark, does the same.  It was very grown up and refreshing actually.  Perhaps in a longer story it would have lacked conflict, but for the novella length it was perfect.Even though there isn’t a lot of sex, there is some clever fantasy from Caitlin which adds a bit of spice and the sex that there is, is hot.

I liked both Mark and Caitlin very much and their story was a lot of fun.

Tagged with: Meg Maguire
Posted in: B reviews