Wolf With Benefits by Shelly Laurenston 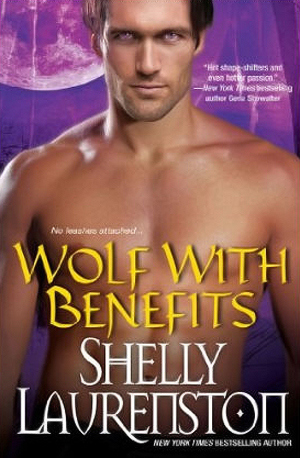 Why I read it: I received a review copy from the publisher via NetGalley.
What it’s about: (from Goodreads)  Ricky Lee has no plans of getting serious about anyone, but he will protect Toni Jean-Louis Parker. Not just because he’s been hired to do so, but because it’s the right thing to do. And if that means traveling around the country with one complicated She-jackal, dealing with chocolate-eating wild dogs, instigating trouble between his brothers, and having the most amazing sex he’s ever had…well, who said his job didn’t have perks?Toni doesn’t know how she keeps getting herself into these situations. But even she has to admit there’s something about Ricky Lee Reed that she finds kind of interesting…and downright sexy. Now they just have to survive long enough to figure out if what they have is worth fighting for…
What worked for me (and what didn’t): I confess I haven’t read any of the previous 7 books in this series.  Looking back, I think that put me at a disadvantage.  There were a lot of characters in this book.  A lot.  I lost count at 30.  Toni has 2 parents, 10 siblings and a best friend, Ricky Lee has 3 siblings plus his mother and various cousins and there are multiple other characters who play a part in the book.  Trying to keep track of them was difficult at first.  And, because there were just so many of them, the set up took a long time.
I was a bit “meh” about the book up until Ricky Lee and Toni started spending time together.  Once that happened, it was much more entertaining for me – I enjoyed their banter – Ricky Lee is a bit of a hoot.

“This is not yelling. This is panicked loud talking!”

“Yeah.” Vic decided to chime in. “His yelling’s not usually this high-pitched.”

“Shut up, unhelpful!” Ricky shot back.

It also took me a while to get used to the world building.  As I had no previous experience with the series, I had a steep learning curve.  It wasn’t difficult as such, but it was a different world to what I was used to in PNR fiction and added to all the characters (did I mention there were A LOT of them?), it took me a while to hit my straps in this book.
The humour is broad – even slapstick in places.  Once I got my head into that zone, things improved as well.  It’s also not what I’m used to.  That said, it was pretty funny and there was a bit of snort-laughing going on.

“Stop calling them that.”

“Can’t get her in my bed if my own kin are insulting her kind.”

“He’s got a point,” Reece said, shrugging. “Unlike men, girls are weird about that sort of thing. It’s like they look for any reason not to sleep with you.”

Rory stared at his brother. “I think that’s only you.”

I did find myself a little uncomfortable with the use of the word “whore” (as in “she was kind of a whore”).

Because there were so many people to cover, so many plot threads to resolve, I didn’t think the romance was extremely strong.  For some reason I had the impression that the heat level of the series was higher than what it was (at least in this book).  The sex wasn’t very frequent (sadly) and not very graphic either.  I would rather have spent more time with Toni and Ricky Lee than have all these extraneous characters with their own stories.  I felt it did take a bit too much away from the romance.
There also appears to be a wider story arc involving an escaped felon (?) – it didn’t take up much of the story but the significance of it was a bit lost on me.
What else? I did end up liking the book and I enjoyed the humour – I don’t think I could read it all the time, but in smallish doses it was certainly entertaining and hit the spot.  I do have (I think) book 1 on my TBR and I plan on reading it.  But I’d recommend starting at the beginning as jumping in at book 8 wasn’t as easy as I’d have liked.
Ricky Lee was the standout character for me.  I loved how he was a proud “redneck”.

“You know he’s not like the Van Holtzes, don’t you?” Her father pushed her away so he could look directly into her face, but he continued to grip her shoulders. “He’s not a chef or cultured in anything that doesn’t involve a banjo.”

He was patient, kind and protective and funny.  Really funny.

“She was seeing at least two other guys when she was going out with me. At the time, it broke my heart . . . but also at the time, when my momma didn’t make blueberry pancakes on Sunday mornings like she promised, that kind of broke my heart, too.”

“Not really a deep wolf, are ya, Ricky Lee?”

If you like a laugh and a different take on the paranormal, I’d say give this series a go.  But, maybe start at the first book.
Grade: B-

Tagged with: NetGalley, Shelly Laurenston
Posted in: B reviews

One comment on “Wolf With Benefits by Shelly Laurenston”