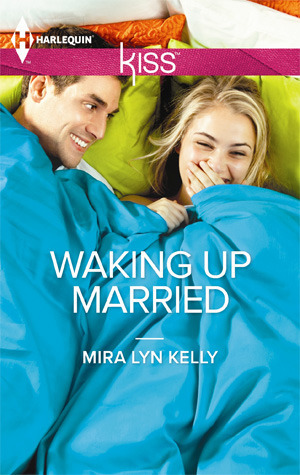 Why I read it: I picked this one up from NetGalley, having heard a lot of good things about this author and the story sounded fun.
What it’s about:  (from Goodreads) Her first thought: “Who are you?”

It’s the morning after her cousin’s bachelorette party in Vegas and Megan Scott wakes up with the mother of all hangovers. Even worse, she’s in a stranger’s penthouse having woken up with something else as well—a funny, arrogant, sexy…husband!

Up until now, finding even a boyfriend had seemed impossible—been there, got the broken heart, sworn off men for good. Then a few martinis with Carter…no, Connor Reed and she’s gone from first meet to marriage in one night!

What worked for me (and what didn’t): Some of my Goodreads friends have read this one and looking at their reviews, it’s like they were reading a different book.  Unfortunately, Connor and I got off on the wrong foot and we never recovered.

The story was well written and easy to read, with some stand out moments (one being the scene at the grocery store with Pete and immediately after at home with Connor) and some really good lines, like this one.

This guy had one of those slanted smiles going on. The kind so lazy only half of it bothered to go to work.

But, ultimately, I couldn’t get over what an asshole I thought Connor was.  Which is odd, because I really don’t think of myself as a feminist, but his manner got on my last nerve.
Apart from that, I did have a little trouble buying into Connor’s idea of a partnership marriage, as opposed to a romantic one.

Connor gave her a satisfied grin. “All the vital components that make a relationship successful, without any of the emotional messiness to drag it down. It’s about respect, caring and commitment. Shared goals and compatible priorities. It’s about treating a marriage like a partnership instead of some romantic fantasy. It’s about two people liking each other.”

Connor’s definition also included fidelity and given that they had already demonstrated an abundance of passion between them, I was left thinking, well isn’t that love? And, why doesn’t he see that?  He’s a smart guy. And then, he goes and contradicts himself, in order to convince her to give things a go.

“We’re good together, Megan. It’s not about glass slippers or fairy tales or love at any sight. It’s not about private schools or mutual goals or any of the other things we’ve talked about today. It’s about you and me fitting together. It’s about this feeling of rightness you told me about last night. The one I’ve had since I met you. And I keep seeing signs of it today. Tell me. Tell me you feel it too.

If I had liked Connor better, I think I would have been more able to roll with the plot which essentially was an excuse to get them together so the sparks could fly.
Connor is very definite in what he wants.  He struck me as mercenary, calculating and extremely self-serving. I thought there might be some kind of redemption for him but after about 3/4 of the way through, I realised that the parts where I found  him most annoying, was him being charming and seductive.

“WHAT IN THE HELL do you think you’re doing?” Megan demanded from the far side of the elevator where she stood, hands on hips, eyes boring into him like little embers of hell.

Connor snapped the picture from his phone then slipped the device back into his tux pocket before it ended up incinerated beneath his wife’s fiery glare, or more likely crushed beneath the spike of her sexy glass slipper.

For a moment, all the red-hot rage directed his way turned to utter shock, leaving her sputtering in a way he couldn’t deny he was getting a serious kick out of. But in a blink, she rocketed back to fury, leaning into the space between them, her voice going lethally low. “I can’t believe you did that.”

“Come on, it’s something for the scrapbook. You’ll thank me later.”

“You know good and well I’m not talking about a picture.”

Yeah, he did. The way he knew taking a snap of her when she was this cranked up was probably a move just short of suicide, but like his decision to break his promise to her back in the club, it was one he wouldn’t regret.

In the example above, Connor has disregarded an agreement he made with Megan not to announce their wedding to her cousin on her own wedding day.  Megan didn’t want to steal her cousin’s thunder.  Connor agreed.  But then he changed his mind.  To add insult to injury, he treats her fury over his disregard of her wishes with amusement.   And, here’s the condescension again “You’ll thank me later.”  Um, no thanks.
I also didn’t like his judgment of women which was another thing prevalent in the book.  Like this.

Connor had to have her.

His wife didn’t flaunt it for everyone to see—thank God—but she was the sexiest thing he’d ever laid eyes on.

He was always telling Megan what was best for her, manipulating her into agreeing with him, putting himself and his desires first.

What else? I’ll read this author again because I enjoyed the writing style and I think I would have liked the book a lot more if I had not developed a dislike of the hero.  But, according to Goodreads, I’m something of an outlier, so YMMV.
Grade: C-

2 comments on “Waking Up Married by Mira Lyn Kelly”