Somebody to Love by Kristan Higgins 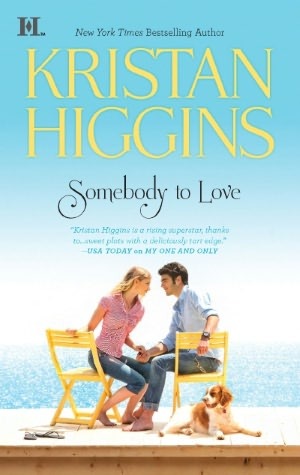 Why I read it:  I picked up a copy from NetGalley and I’m a fan of this author.
What it’s about:  (blurb from Goodreads) After her father loses the family fortune in an insider-trading scheme, single mom Parker Welles is faced with some hard decisions. First order of business: go to Gideon’s Cove, Maine, to sell the only thing she now owns—a decrepit house in need of some serious flipping. When her father’s wingman, James Cahill, asks to go with her, she’s not thrilled — even if he is fairly gorgeous and knows his way around a toolbox.
Having to fend for herself financially for the first time in her life, Parker signs on as a florist’s assistant and starts to find out who she really is. Maybe James isn’t the glib lawyer she always thought he was. And maybe the house isn’t the only thing that needs a little TLC.
What worked for me (and what didn’t):  First off, this is the second book Ms. Higgins has written in 3rd person POV and once again, we get (a lot – yay!) of the hero’s POV in this story.  As much as I have enjoyed her 1st person POV books (well, mostly), my continuing “complaint” was that there was not enough of the hero for me.  I’m a very hero-centric reader I have discovered.  More hero, in general, equals more win for me.  I hope that Ms. Higgins decides to stick with 3rd person and giving us the hero’s perspective because I just love it.
Now, on to this book.   I loved James, the hero.  He’s a genuinely nice guy – he’s kind, smart, humble, funny, handy, built, sexy, very good-looking and all round wonderful.  He does have a couple of darker secrets and something he’s been paying for for a very long time, which serve to round out his character and save him from being too good to be true and too good to be interesting.  I found myself extremely sympathetic to him as the book went on.  His love for Parker, almost from the first time he even sees her, is something which permeates his actions – even though for most of the time they have known each other Parker thinks he’s lower than a bug, he is unfailingly generous to her.  He decides to go to Maine and help her flip the house for sale – he wasn’t asked to by Parker or her father and he’s not getting paid for it.  He does it because he cares about Parker.  There’s something very attractive about a guy so steadfast.  It can be something which can come across as wimpy but James is not a doormat. He’s nice but he doesn’t let himself be walked on either.
As for Parker, well, mostly I liked her too.  She copes very well with the change in her circumstance, considering.  She doesn’t spend a lot of time complaining and she’s, for the most part, not a “rich bitch”.  Yes, she has had money all her life but she’s not afraid to work hard – she demonstrates this many times while in Maine and it is one of the things James loves about her.  She is also a devoted mother to Nicky – but she’s not an over protective gorgon and she doesn’t spoil him terribly rotten either –  (I think most parents would like to spoil their children – the more money you have the easier that must be) – Nicky is still required to use his manners and behave well.  She also has a healthy relationship with Nicky’s father Ethan and his wife Lucy (their book is the only Higgins I have not read)  – they are her best friends.  Her mother is on her 4th husband and tends to breeze in and out of her life but the impression I got was that while Parker would have liked to be closer to her mother, she was happy enough with the way things were – there was no strain there. Parker has a difficult relationship with her father, Harry and resents those closer to him than she is.   Which means, James.  Harry has two “minions” which Parker dubs “Thing One” and “Thing Two”.  The original “Thing One” retired and James took his place as Harry’s personal attorney.  Thereafter, Parker called him “Thing One”.  To me, this is unutterably rude.  It’s one thing, perhaps, to think of someone by a disparaging nickname but to call them that to their face?  Repeatedly?  Well, it was the one thing I disliked intensely about Parker.  While I understood that her rudeness to James was a reaction to her poor relationship with her father and her jealousy and confusion over his good relationship with him, it was still so very rude that I found it hard to reconcile.Parker has been writing a series of children’s books called the Holy Rollers (earthbound child-angels on skates).  The pitch was a joke but she’s been stuck with these characters for years and has finally managed to end the series.  (I did like the flat cat stuffed toy which appears later in the book. LOL!)  Problem is, she is having trouble coming up with a something new – her ideas are pretty funny but not setting her agent/publisher on fire.  Although she donated her earnings from the Holy Rollers to charity, now she actually needs to earn a living and she’s desperate to try and come up with a new series.  I liked what she ended up doing but no spoilers here!

Nicky, Parker’s son is a mostly sweet little boy but he’s not perfect and he’s not charmingly precocious either (what a relief).  Lavinia, Parker’s older cousin from Maine is a hoot – her descriptions of having steamy old people sex were hilarious and I nearly choked (as James did) when she described playing “Spank me, nanny” with the local Judge. 😀

For fans of Higgins, we also catch up with Maggie and Malone and Chantal and Jonah and various other Gideon’s Cove characters.  It didn’t feel too cutesy to me and it was nice to see what they were doing.  Although, I’ll probably have to go back and read Catch of the Day because I couldn’t remember a lot of it, I read it so long ago.
The bedroom door, while not firmly shut in this book, is a little more closed than I think it was in the previous 2 books – I’d be happy if the door opened again!
What else?  I can’t go into some of the best parts of the story without giving away spoilers but I’ll just say that there are some things towards the end of the book which I found very scary, emotional and moving and there were even some tears.
I could have done without the intervention from Leah but I appreciated that all of Parker’s problems weren’t solved overnight and that, while James found some measure of peace with his family and himself, things weren’t magically fixed there either.
I suppose some people will find the epilogue a bit cheesy, but I appreciated that it took place 18 months after the events of the book (thus I was sure that they were making things work) and that James took the time to ensure Nicky was okay with what was happening between he and Parker.
Parker is 35 at the start of the book and James is 30, so there was a bit of angst on her part about whether he was too young for her – it felt appropriate that she’d think about it and that it would be something of an issue, but I certainly appreciated that it wasn’t beaten to a pulp.  Parker gave James credit for knowing his own mind.  Plus, James didn’t come across as “young”. He and Parker seemed very much equals to me.
I liked this book very much.  James is a peach and once Parker stopped calling him “Thing One” she was pretty special too.
Grade:  B

Tagged with: Kristan Higgins, NetGalley
Posted in: B reviews

3 comments on “Somebody to Love by Kristan Higgins”