Fix You by Mari Carr 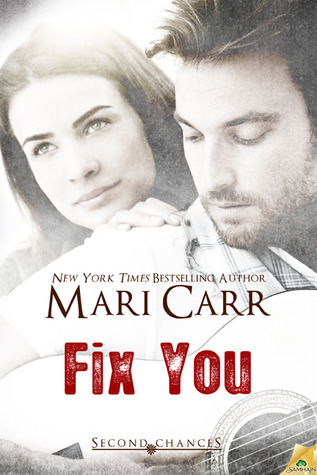 Why I read it:  I get the Samhain Newsletter and when I read the blurb I was hooked, so I pre-ordered and read it as soon as I could.  Also, I love the Coldplay song on which the title is based.
What it’s about: (from Goodreads)  After too many years of secretly loving her best friend, Zoey realizes she’s been shortchanging herself. It’s time to take action. This New Year’s Eve heralds the year she’s going to tell Rob the truth. Even if he is on the road, reaching for musical stardom with his band.

Her plan is derailed when she discovers a lump in her breast—and it’s not “nothing to worry about”. How can she ask Rob to take a chance on love when her future is so uncertain?

Rob has spent his entire life chasing his dream, but the moment he hears Zoey’s voice on the phone, he realizes he’s been running the wrong race. Zoey never sounds like she’s been crying. Ever. Without a second thought, he books a flight for home, determined to give her everything she needs. A shoulder to cry on, a hand to hold…and nights of intensely emotional, passionate sex.

His biggest challenge, though, is convincing his best friend that he’s in it for the long haul. Because he finally knows what he wants, and it’s not fame and fortune. It’s her—and her love.

What worked for me (and what didn’t):  Despite the heavy subject matter, the book isn’t all doom and gloom.  The author cleverly blends flashbacks of special moments from Zoey’s and Robbie’s history, showing the reader how they met and what they mean to each other.  The cancer treatment sounded realistic to me (I hope I never have to find out how realistic) but the surgery was glossed over – it was mentioned and then it was past.  I didn’t mind that it wasn’t a focus but I was a little surprised that the story skipped from planned treatment straight to having chemotherapy.
While I enjoyed the strong bonds of friendship Zoey had with her female friends (the “wine girls”) I could have used less of the obvious sequel baiting.
The main conflict in the story was Zoey’s medical condition and, given this is a romance and I’m guaranteed a HEA (or I want my money back!!) there wasnt’ a huge amount of tension.  Other than that, Zoey and Robbie were ideally matched to one another. There was a kind of “little mis” trope running through the story where Zoey thought that Robbie was going to return to life on the road with his band and was only with her while she was having treatment. Normally, miscommunications bug the heck out of me but in this case, it actually made sense and I gave it a pass.  Robbie had excellent reasons for not saying anything right at the start and it didn’t keep the couple apart per se, just delayed the HEA moment.
One thing which did strike me as odd was that the sex was fairly vanilla right up til the end where there is a brief conversation between our happy couple about the possibility of exploring some bondage, anal play and wax play.  While I liked that Zoey had a “what’s sauce for the goose is sauce for the gander” approach, it felt out of place and unnecessary.  Almost an afterthought to spice the story up.
I liked Robbie very much and I loved his attitude to Zoey’s treatment – how he supported her but let her do for herself, didn’t take over but was totally on her side.  How he ached for her and how scared he was.
I enjoyed the story – it’s about 120 pages, so it was an easy night’s reading for me and the connection between the lovers but it did lack a little in the conflict department.  I liked the writing style and characterisations so I expect I will be reading more from this author.
Grade:  B-