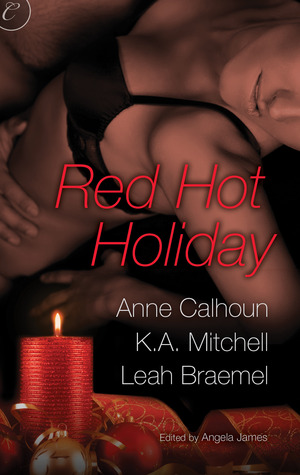 There’s so much Jonah Kendrick hasn’t tried, and so much he wants to explore. But just before Christmas he finds a ring box in his boyfriend’s desk. Jonah panics. He loves Evan and their sex is hot, but how can Jonah be ready for forever, when there are so many items on his Naughty Bucket List? Desires that might drive Evan away.

Evan’s noticed Jonah has been distant. His usually talkative and cheerful boyfriend is preoccupied. The seemingly straitlaced Evan stumbles across Jonah’s wish list of sexual kinks, and Evan realizes he may not have to hide his true nature from Jonah after all. The Dom in him wants to see Jonah on his knees, begging, submitting, but Evan isn’t sure Jonah’s ready to accept what being Evan’s sub would mean.

The two lovers must figure out how to share their hidden desires with each other before their secrets permanently damage their love.

What worked for me (and what didn’t): I love KA Mitchell stories.  I like her style, the way she writes sex scenes (and speaking of, in this book – whoa baby!) and the humour in her stories.  This one wasn’t quite as successful for me as other books, mainly because the conflict was the “big Mis” which is one of my least favourite tropes in the history of tropes.  I don’t get why people just can’t talk to each other.  Of course, if Jonah and Evan had‘ve actually communicated, there would have been no reason for the story… but still.  I liked it but big misunderstandings aren’t my favourite.

Maybe Jonah would never be able to say for sure if the flashing lights in his eyes were because he’d finally seen the ball drop in Times Square, or afterimages burned onto his retina from coming so hard he’d broken something in his head.

Ahh, KA Mitchell, you certainly do have a way with words. 🙂
Grade: B-

I Need You for Christmas by Leah Braemel
Ryan Porter is a sculptor, and beneath his callused hands, even the most rigid metals bend to his will. So, too, does his girlfriend Megan—a confident, strong woman who delights in submitting to Ryan’s dominance in the bedroom.

Megan is a Mountie, and she’s spent the past few years in the arctic following her career dreams. Family obligations kept Ryan at home, but their love survived the distance thanks to several hot visits. A Mountie always gets her man, and Megan is bound and determined to keep Ryan.

Now Megan’s with Ryan for the holidays…but how long will this visit last? She’s always been willing to do anything Ryan desires, but will he finally tell her that all he needs for Christmas is her?

What worked for me (and what didn’t):  This was my first Leah Braemel novella.  I believe I may have one of her other books on my TBR and if this is typical of her writing, then I think I’ll be reading more of her.

You’d think, given what I said above about the KA Mitchell story, that the miscommunication in this story would have bothered me – but it didn’t.  I think it was that it was more of a gimmick and a fun secret, deliberately kept from one another as a surprise. And, it demonstrated that each of them was fully committed to their relationship and willing to make sacrifices for it.  Ryan and Megan have been doing the long distance relationship thing for a very long time.  I felt for them, being separated for long stretches.  I respected them for being faithful to each other and for the choices they made at the times they made them.  I liked how Ryan didn’t expect Megan to give up her dreams for him.  I also liked that Megan felt the same way about Ryan.  And the sex was very hot.  This couple had a connection and it was noticeable right from the start.  I always think novellas have a head start when the couple is established from page 1 and this whole anthology is proof of why actually.

Breath on Embers by Anne Calhoun
Christmas is the perfect time for Firefighter Ronan O’Rourke to take things to the next level with his sexually adventurous girlfriend. He knows she has feelings for him—and he’s sure of his feelings for her—but when Thea refuses his invitation to sample Christmas in New York City because what they share is nothing more than sheet-burning sex, Ronan sets out to change her mind.

Deep down Thea Moretti knows she cares for Ronan, but she can’t move past her grief over her late husband. Loud music and sex with Ronan are the only things she’s got that her feel alive, so she takes as much of both as she can get. She knows Ronan wants more, but during the darkest time of the year finding her way won’t be easy.

Ronan gambles everything and challenges Thea: one night of passion with him and another man. Can he prove to her that what they share isn’t just great sex but an emotional connection strong enough to last forever?

What worked for me (and what didn’t): The mood of this story was quite different from the other two novellas.  This is more serious and bittersweet.  Thea is struggling with grief after the death of her husband.  She feels numb and that there is a void within.  She fills that void with loud metal music and sex with Ronan but she believes she is unable to feel anything and so cannot commit to more.  Of course, it isn’t that she can’t feel, but rather that she chooses not too – partly out of habit and partly out of fear.  Ronan is no stranger to grief and is very patient with Thea while at the same time wanting more from her and pushing, little by little to get it.  The menage scene was pretty sexy and it made sense in the context of the story too.  Bonus.

The bit where the wall between Thea and her feelings comes down was very moving and I even got a bit teary.  A rare thing in an erotic novella, for me anyway.  I’d read Liberating Lacey by this author before so I knew she was a good writer and I had been looking forward to this story.  It has a happy ending of course, but I wouldn’t call it a happy story – it is, essentially about grief.  I liked that it wasn’t all hearts and flowers and I liked that Ronan was patient and kind and sexy as all get out.  Plus – firefighter.  Rowr.

Grade: B
Another strong Christmas anthology from Carina press. I recommend. 🙂