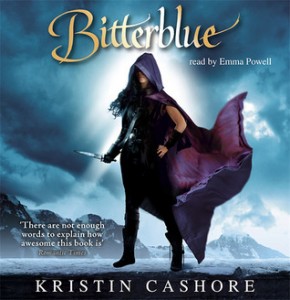 Why I read it:  I’ve had this one on my TBL for a little while and decided to sneak it in between review books.

What it’s about: (from Goodreads)  Bitterblue is now queen of Monsea, still under the influence of her father Leck, a violent psychopath who altered minds. Her advisers want to pardon evildoers and forget everything, but she sees the past holds fast. Two thieves, who only steal what has been stolen, hold the truth and change her life. One, his Grace skill unidentified, has a key to her heart.

What worked for me (and what didn’t):  Oh, so many things to say!

I’ll start with the narration because I’m far less conflicted about that. It was superb.  Emma Powell doesn’t have/use a super deep voice for her male characters, but she manages to imbue each with enough difference and enough about what makes them that particular character (which is in part due to the writing which provides those details) that almost all are easily differentiated.  I found it hard to identify Rood from Runimood (apologies if I have the spelling wrong – I only listened and haven’t seen these names in print). Perhaps Prince Sky was hard to differentiate from Po – but Sky was in the story for such a short time, it wasn’t a problem.  Saf has a Lienid accent (which Powell does as Welsh) and is similar to Po but so different a character, it was easy to tell them apart.  Katsa has a more brash tone than Bitterblue and the elderly characters have a convincing wobble to their voices. I noticed subtleties when listening that enhanced the experience beyond what it could have been just reading.  Tones that were perfect but which I wouldn’t have thought to give certain words or phrases.  The subtext was also clearly delivered by the emotions in the narration.

Ahoy! Thar be spoilers!  Read on at own risk.

END_OF_DOCUMENT_TOKEN_TO_BE_REPLACED 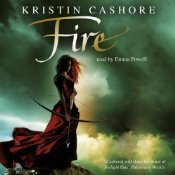 Why I read it:  I decided to listen to one of my own audiobooks for a change.  I have lots of review books to listen to but every now and then, I like to sneak in a just for fun listen.

What it’s about: (from Goodreads)  Set in a world of stunningly beautiful, exceptionally dangerous monsters, Fire is one of the most dangerous monsters of all – a human one. Marked out by her vivid red hair, she’s more than attractive. Fire is mesmerising.

But with this extraordinary beauty comes influence and power. People who are susceptible to her appeal will do anything for her attention, and for her affection. They will turn away from their families, their work, and their duties for her. They will forget their responsibilities to please her and worse, crush nations, neglect kingdoms and abuse their power.

Aware of her power, and afraid of it, Fire lives in a corner of the world away from people, and away from temptation. Until the day comes when she is needed – a day when, for her king, she has to take a stand not only against his enemies, but also against herself.

What worked for me (and what didn’t): I adored this listen. I was immersed from the prologue (which was creepy) and engrossed as Fire’s life (Fire being the title character) became the main focus of the story.  Fire is set chronologically before Graceling but there is information in the prologue and toward the end of the book which would be kind of spoiler-y for Graceling, so I’d recommend reading them in order.  I understand Bitterblue, the third book (which is awaiting me on my iPod) doesn’t really have any relationship to Fire so I gather you could read books 1 and 3 without missing out on much.  But, I really loved Fire so I’d say whether you read/listen to Bitterblue or Fire first – don’t skip Fire altogether. 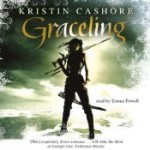 Why I listened to it:  Most of my audiobook listening these days are review copies for AudioGals but every now and then I like to fit in a book from my own audiobook library and that’s what I did with this one.  I have had it for a while and I was in the right mood.  A number of my blogger friends have said the book is excellent and I’d heard good things about the audiobook too.

What it’s about: (from Goodreads)   In a world where people born with an extreme skill – called a Grace – are feared and exploited, Katsa carries the burden of the skill even she despises: the Grace of killing. She lives under the command of her uncle Randa, King of the Middluns, and is expected to execute his dirty work, punishing and torturing anyone who displeases him.

When she first meets Prince Po, who is Graced with combat skills, Katsa has no hint of how her life is about to change.

What worked for me (and what didn’t):  It had been so long since I’d bought the audiobook, all I remembered about it was that it was a fantasy.  So I plunged in basically knowing nothing about it.  I was caught up from the very start. Katsa is a girl of about 18 or so.  She is the orphaned niece of King Randa who rules the Middluns, one of the Seven Kingdons in this alternate world.   In this world, some children are born “Graced” – the outward sign of it is that they have bi-coloured eyes – but just what their Grace is, cannot be told from looking at them alone.  Graceling children in King Randa’s realm are sent to the king to be of use. Those whose Graces are not useful are sent back to their families but they are treated with suspicion and are basically outcasts.

When Katsa was about 8, her Grace revealed itself.  She is a very capable killer.  Her uncle decides to train her as his own private attack dog. Quickly, Katsa gains a fearsome reputation.  As she grows however, she dislikes being forced into breaking arms, removing fingers, knocking heads and killing for the king’s purposes.  She starts a kind of resistance movement, called the Council and by it, uses her Grace for justice.  I think that in doing so, she begins to understand her own power and that she can control it’s use.  This is a theme which the book comes back to every now and then as Katsa grows and issues of power and control are extremely important to her.