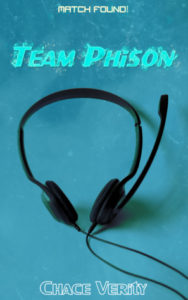 Team Phison by Chace Verity – B- One of my friends recommended this novella to me on Twitter and as it was only 99c I bought it (I’m cheap). While I didn’t connect with it quite as well as she did, I liked this story about a 55 year old guy who meets a 27 year old young man online when they both play a (fictional) MMORPG (that’s Massively Multiplayer Role Playing Game for the non-geeks in the room) which also has some FPS (first person shooter) aspects to it. Phil Hutton is a grumpy gay restaurant owner in Provincetown who broke up with his long term partner a little while before the book began. He’s lonely and looking for love but not having much success. Tyson Falls is a young bisexual man working as a server in a pizza and burger place in Georgia. Over time, they become friends and then more, eventually having to deal with the distance between them to get their HEA.

The story is told entirely from Phil’s POV so I found Tyson to be somewhat opaque at times. While the age difference didn’t bother me, sometimes I was a little concerned about the relative power differential between them – Tyson doesn’t have much money, Phil is quite well off, relatively speaking.