Falling from the Sky by Sarina Bowen, narrated by Tanya Eby & Aiden Snow 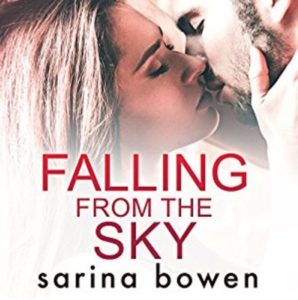 What it’s about: (from Goodreads)  She’s the woman he doesn’t remember. He’s the man she can’t forget.

Bad boy Hank “Hazardous” Lazarus used to have everything: a gorgeous girlfriend, a career as a freestyle snowboarder and a spot on the US Olympic team. Nine months ago, after a bad crash in the half pipe, he woke up in the hospital, unable to move his legs. Now he’s landed there again, but gravity is not the culprit. With his family pressuring him to try a groundbreaking treatment, Hank self-medicates with too much tequila instead.

Doctor Callie Anders has the courage to restart a patient’s heart with a thousand volts of electricity, yet she’s afraid to risk her own. So she doesn’t confess to her newest patient they they met just before the accident, an encounter that he doesn’t remember. Even as their friendship develops, she won’t admit that she regrets turning down his dinner invitation, or that her heart stutters every time those inked shoulders roll through the door of the therapy department.

With another Vermont winter coming again, Hank needs a hand out from under the avalanche of his disappointments. If only Callie were brave enough to take the job.

What worked for me (and what didn’t):  I’ve had the ebook version of Falling From the Sky on my TBR (of Doom) for ages but never found the time to read it. Tanya Eby is one of my favourite narrators and I’ve heard good things about Aiden Snow (although many of his romance audiobooks seem to be geo restricted for me so I previously had limited opportunity to give his narrations a try). My TBL is shorter than my TBR and I was motivated to bump this one up the queue.

As is commonly the case with audiobooks, I didn’t read the blurb before I started listening. I’m not entirely sure what I was expecting but it wasn’t that the hero was going to be rendered paraplegic in the first chapter, or that he would not make a miraculous recovery. So the book went in a different direction than I thought it might. That’s not a complaint and really, if I had read the blurb I’d not have been surprised at all. Still, I did experience a bit of a gut wrench when I found out that Hank had been so seriously injured so there is something to be said for not reading blurbs first IMO.